Why should we celebrate 60 years of the laser? 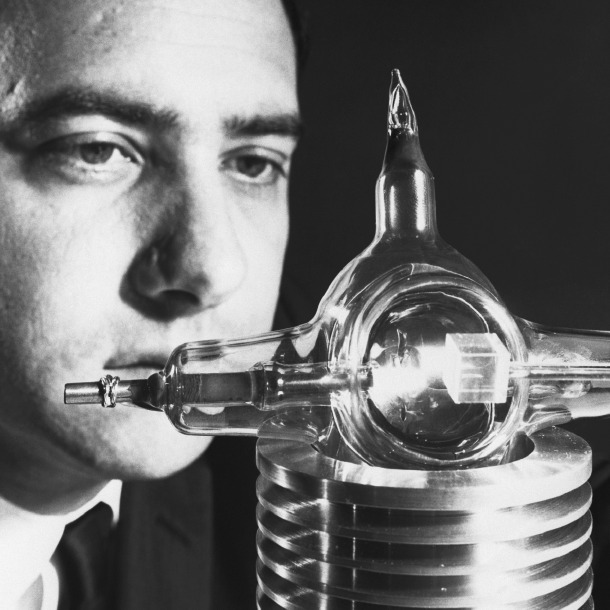 Dr. Theodore H. Maiman, of Hughes Research Laboratories studies a ruby crystal in the shape of a cube in a laser (Light Amplification by Simulated Emission of Radiation) which is the essential element in a new electronic device. Date taken: 07 July, 1960

In 1917, physicists knew that atoms could absorb and emit light spontaneously. Einstein’s insight was that light from one atom could stimulate the next one to emit light that was in-step with the original and of the same wavelength.

Almost 40 years passed before scientists figured out how to harness this idea. But it wasn’t in the world’s first laser, it was in Microwave Amplification by Stimulated Emission of Radiation, or MASER for short. The race to build a similar device using visible light – the laser – was now on.

It’s been 60 years since Theodore Maiman produced the first laser light. Maiman’s device was a solid-state laser in which ruby atoms incorporated in a transparent sapphire crystal were pumped using a photographer’s flash lamp. His breakthrough was rapidly followed by another milestone: the demonstration of the first semiconductor laser in 1962.

Making lasers out of semiconducting material has the advantage that the atoms inside the material can be excited directly using an electric current, and so don’t need an optical pump source. This means they can easily be integrated into an electrical circuit to make very compact systems. But early semiconductor lasers could only operate at low temperatures and it took many more decades of research into precision crystal fabrication techniques and the invention of a new type of semiconductor structure - the heterostructure diode - before devices that operated at room temperature became commercially available. But when they did, they revolutionised the world.

These new lasers drove the CD and DVD revolution and then the development of the global optical fibre communication networks that we all rely on today. They also ushered in a new age for solid-state lasers. Pumping solid-state lasers using multiple laser diodes rather than lamps allowed them to be scaled up to the powers needed to drive nuclear fusion.  Lasers have grown into a huge and varied family of technologies that are just as useful in the home as they are in space telescopes, transforming our communications and computing, introducing pain-free surgery and giving the beauty industry a significant makeover. Today’s semiconductor lasers can be mass-produced for a low-cost device with a footprint that is smaller than a pen. Everyone can now have a laser in their pocket.

For a student-friendly history of the laser see: