Why one horsepower is more than the power of one horse

The horsepower unit derives from a marketing gimmick devised by James Watt. When attempting to sell his newly invented steam engine in the 1770s, Watt realised that many of his customers would use the machine to replace horses, so he set out to measure the power delivered by a horse.

He set two heavy dray horses to pull a 100 lb (45kg) mass from the bottom of a well and found they could achieve the task by walking comfortably at 2.5 miles an hour. Watt then added an extra 50% to the calculation to account for work done in overcoming friction and defined 1 horsepower as the power needed to lift 150 pounds (68 kg) out of a 220 foot (67 m) deep well in one minute.

It has been claimed that Watt deliberately overestimated the power output of a horse to ensure that his steam engines performed better than the horses they replaced. Whilst the peak mechanical power of a single horse can reach up to 15 horsepower, it is estimated that a typical horse can only sustain an output of 1 horsepower (746 W) for three hours and, if working for an eight-hour day, a horse might output only three quarters of one horsepower. Researchers have calculated the average power output of various animals (as a rough guide, a healthy animal can pull 10-15% of its weight for a period of four hours): 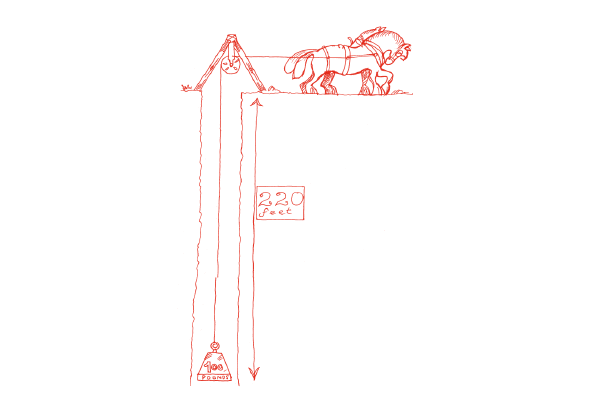 Flanders and Swan wrote a song about the first and second laws of thermodynamics that contains the verses:

You often read that “Energy is what makes things happen”. But you need to be careful to think a bit before you say it.

Class practical: This impressive demonstration shows how easily the crystal comes apart if the blade is accurately aimed...