One place where it's hard to imagine movement is that our entire planet is moving. On the simplest description the Earth itself is spinning, as well as orbiting around the Sun. Both are nearly spherical, and Earth is really, really smooth (really smoother than a billiard ball, if scaled down).

Try standing outside (preferably on the beach) at sunrise and imagine the Earth rotating under you so as to gradually reveal the Sun, which remains fixed. Repeat at sunset, again imagining the Earth carrying you with it you so that the Sun sinks below the horizon. It's not easy. This may help: drag up on the clock to move through the day.

The cycle of day and night is caused by the rotation of the Earth as it spins on it axis once every 24 hours. Because of this spinning motion, the Sun appears to move through the sky but in reality it is the Earth that does the moving.

This effect is like being on a train when the train next to you starts moving. Often you think you are moving only to realise, when you look out of the other window, that it is the other train that is pulling away.

Evidence that it is simpler to suggest that Earth is spinning 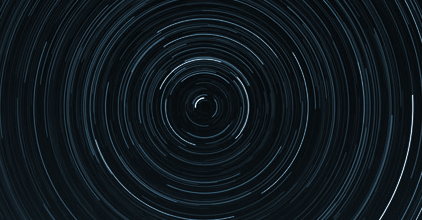 A piece of significant evidence comes from long exposure photographs of the night sky. To create these photographs, the camera is pointed at the North Pole Star. All the stars come out as long circular trails as if they are all turning around the Pole Star

The same effect is observed with the camera pointing at the Southern Celestial Pole, as shown.

There are two possible explanations for this effect. Either all the stars are turning around a single point or the Earth on which the camera is fixed is turning.

The second explanation is correct. The axis on which the Earth spins is currently pointing at the Pole Star and so as the Earth rotates all of the stars appear to move on circular paths around that star. This apparent circular motion of the stars can easily be seen on a clear night if you pick out the Pole Star and then follow the progress of the other stars around it as the night progresses.

The explanation for day and night depends on the idea that the Earth rotates (spins) on its own axis: the Earth spins around and the axis is at the centre of that spin.

When the UK faces the Sun it's daytime because the UK is illuminated. The UK faces away from the Sun at night and so is in the dark.

Is there life on the Moon?

Here you use photographic evidence to consider various features of the surface of the Moon.

Selecting and developing activities for lighting...

Suggestions for activities to aid the teaching of 'lighting the Earth' based on the Physics Narrative and the Teaching...

Day and night: what we know and how we know

The cycle of day and night is caused by the rotation of the Earth as it spins on it axis once every 24 hours. Because of this...