What stores do we need?

What stores do we need

This is a question that often comes up in workshops that we run. So, this post will consider what stores are going to be helpful in our energy discussions and for the before-and-after analysis. But, before doing so, it’s worth remembering a few points about what we are trying to do here:

Taking those points into consideration, any store should:

I will return in more detail to the idea of working in a subsequent post. However, I will use it here because it is a useful way to get into discussions about energy (because it is easily quantified) and it will help determine which stores will fulfil the criteria above. We can do work on (or within) a system to change its energy profile. For example, by lifting something up. 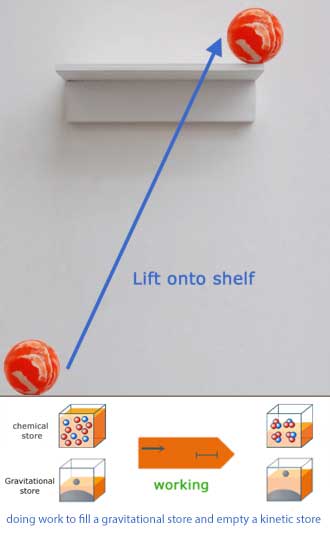 If I lift a ball onto a shelf, I do work (in a technical sense). I can leave the ball on the shelf for a while and, at a later time, allow it to fall and do the work back for me. While the ball is on the shelf, the system (ball plus the Earth) is storing energy thanks to the gravitational force between its two constituents.

So, it looks like it is going to be useful to refer to a gravitational store that is filled a bit when we raise an object and empties a bit when it falls.

Let’s see if it matches the criteria above.

We can follow a similar reasoning for an elastic store. Let’s say the ball is made of rubber. We can do work to stretch (or compress a rubber ball). It is elastic and will return to its original shape. So, we will get back at least some of the work that we do on it.

Therefore, it looks like it will be helpful to be able to refer to an elastic store that fills and empties as the ball is deformed and returns to its original shape. Referring to our criteria, we can calculate the energy associated with the deformation at any instant and the store refers to the work involved in the deformation. So let’s add it to our list. 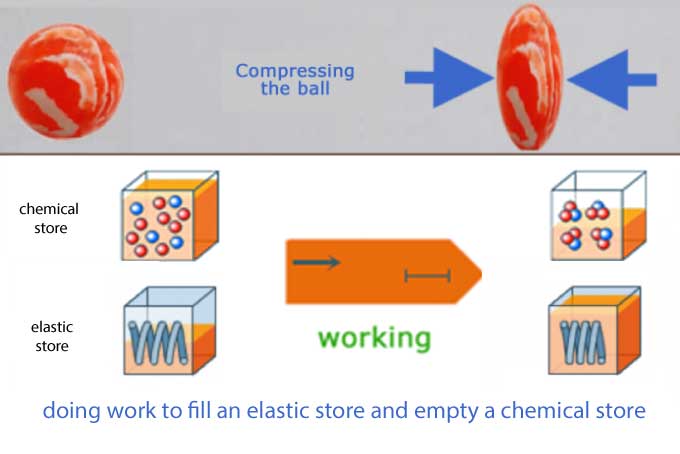 The idea of a kinetic store is less obvious. Some people are not comfortable with thinking of a moving object storing energy. However, we need to remember that the ‘store’ terminology is simply a way of talking about the energy associated with a system (and its behaviour) to younger students.

Also, it is the case that we can do work to make something move (for example by propelling a ball upwards). And the moving object will do work back for us (in this case, to raise the ball in the Earth’s gravitational field). Therefore, there is certainly energy associated with moving objects.

Does it fulfil our criteria? Yes: it will be helpful (because so many systems involve constituents that start and stop moving); we can quantify it and we can do so at any instant (as long as we know the speed and mass of an object).

The speed is constant during the journey so it is not playing any part in the changes that occur (after all, we do not consider all the other stores that are constant).

Having said all that, there may be situations in which we would use the kinetic store in our analysis. For example, to determine the braking distance of the car – right at the end of its journey. This example shows why it is important to a) define our start and end points and b) choose them depending on the calculation that we might want to perform. The important feature is that we (and our students) do not get tangled up in chains of energy stores.

We can do work to raise the temperature of a system (or to change its state). In each case, the energy associated with the system has increased due to the internal arrangement or movement of its particles. We do not really have a common school-level term for how the system is storing energy. I have previously suggested “internal” store (because it relates to the term ‘internal energy’ that is used at a higher level; and it does not imply ‘heat’). However, "thermal store" is a better term and can be used to cover both temperature rises and changes of state. It is used in SPT. 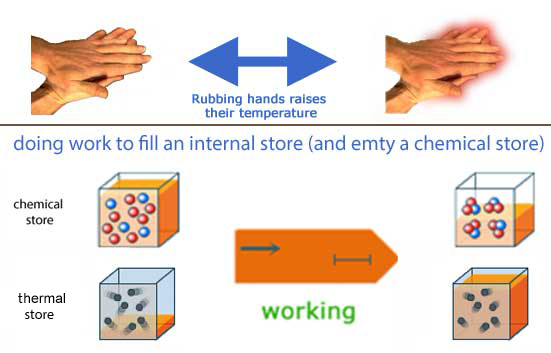 The most important point is that, whatever is stored, it is not ‘heat’. I will return to this in a future post. For now, suffice to say that heat is to do with a process rather than the way that energy is stored or associated with a system.

To round off fairly quickly, the other four stores that are useful, calculable and identifiable (at an instant) are chemical, nuclear, vibrational, and electric/magnetic. So here is a complete set of stores that should be sufficient for most of our discussions (certainly at Key Stage 3). 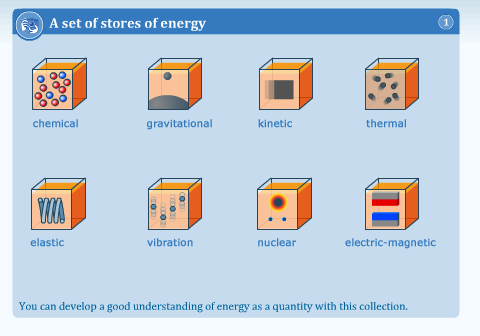 Note that there are three (four if you include ‘heat energy’) of the old ‘types’ of energy that are not featured above. They are: ‘electrical energy’, ‘sound energy’, and ‘light energy’. I will say more about these spurious labels next week.

It is worth noting that:

These ideas are developed further in Episode 2 of SPT.

As discussed above, the use of solar panel technology requires systems that can store energy and release it when solar power...

What Watt did next

Despite his financial success, Watt was not a natural businessman and he wrote in a letter:

The legend of the boiling river

For hundreds of years, legends spoke of a boiling river in the Amazonian jungle. In 2011, geoscientist Andrés Ruzo...