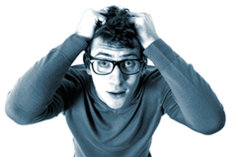 A common approach to introducing the idea that light shifts energy in discrete chunks or photons is to state that light not only has wave properties but also can be thought of as being like a stream of particles. Such a description of a wave/particle model for light can be unsettling for students, and we think you could be more helpful by being more careful, unlike this teacher:

Igor: So are you saying that light is not waves – that we have been taught the wrong stuff?

Igor: But how can light be both a wave and a particle?

One of the problems here is that of describing light as a stream of particles, with the word particles suggesting something real and substantial. This, not surprisingly, prompts questions from alert students:

Harriet: How can you have light particles when light travels through empty space from the Sun? There is nothing there! Are there particles of light passing through space?

These non-productive images and thoughts might be avoided simply by not using the shorthand term light as particles. This episode introduces the ideas that in light shifts energy in discrete amounts. It adds nothing to this new idea to describe these chunks of energy as particles. You might also seek to avoid the equally unhelpful phrase wave-particle duality.

Waves are all around us and an essential part of our everyday life. These series of videos provide useful ideas and practical...

One distinction that is made by philosophers about the nature of science is in terms of it being a positivist or realist...