A simple view of an iron

Many domestic appliances switch from an electrical pathway to warm things up (and even cool them down as well). The heating by particles pathway and the heating by radiation pathway are both used, depending on what needs to be warmed.

Consider which of these pathways might be used by the following:

Again, there are two theoretical perspectives: the engineer's detailed view and the physicist's energy view.

These are less distinct than in the case of the motor but they are still separate. The engineer will concentrate on the resistive element that provides the heating: on its dimensions (both cross-sectional area, and length), on how effectively the plate next to it is warmed, and on how to insulate the operator from this warming. The pathways view is much simpler, at least for the perfect iron: all of the power in the electrical pathway is switched to the heating by particles pathway. 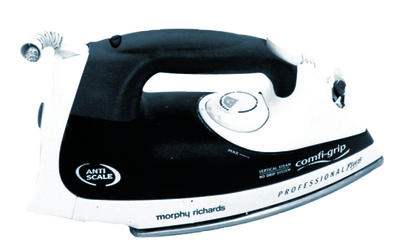 The better the design of the iron, the more power in the pathway directed to the energy store associated with the blouse.

How to calculate accumulations in stores as a result of warming

The power in the electrical pathway (set by the current and the potential difference, as ever) and the time both set the accumulation. As the iron is a mains appliance, the current will in practice be set by choosing the resistance of the element in the iron.

The energy accumulating in the thermal store is set by the power in the heating by particles pathway and the time. But there is no simple way of finding the power in this pathway from measurements made with commonly available laboratory instruments, so watch the energy accumulating in the store directly, as the temperature rises (more on this in the SPT: Energy topic).

mass  ×  a constant for the material.

So far we have concentrated on combining chemicals to get jobs done. However burning fuels with oxygen is not the only way to...

Another everyday concern is the energy balance in our homes. In Northern Europe, mostly keeping the house warm enough in...

Many students think of temperature as a measure of the amount of heat an object contains, and that the temperature of objects is related to their size