Use this set-up to introduce the motor effect: a motor's spinning comes about from the interaction between the current in a conductor in a magnetic field. There's no spinning here, but the geometry is very clear.

Safety note: If the current is too large then the foil will get hot and the force may be too large and tear the foil. The power supply may suffer if it cannot supply a sufficiently large current. Care is needed, and the potential difference must remain modest.

Introduce the very strong magnet. It is shaped in such a way that the north and south poles are at each end of the horseshoe: between the two poles there is a magnetic field that's uniform (the strength and direction of the field is the same in that space). Remind students that magnetic field lines run from north to south. You might put an arrow, or a piece of card with field lines drawn on it, across the flat front edge of the horseshoe pointing from north to south to show the magnetic field.

Introducing the apparatus and switching on the supply 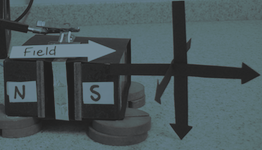 Teacher: Between the two poles of the magnet there is a thin strip of aluminium foil, which is a good electrical conductor. Two bulldog clips (one on each side of the magnet) connect it to the power supply, which drives an alternating current through the foil, changing direction 50 times a second.

Now switch on the supply.

Teacher: What do you hear?

This is the motor effect in action. Now for some details on the forces and fields – adapt this dialogue to suit your class (you may need to seek more elucidation to get to these answers).

Teacher: In what direction is the wire moving relative to the direction of the current?

Teacher: In what direction is the wire moving relative to the direction of the magnetic field?

Bringing things to a close – and a possible extension

Teacher: A current-carrying conductor, at right angles to the field lines of a uniform magnetic field, has a magnetic force acting on it. The direction of this force is at right-angles to both the current direction and the field direction. This is called the motor effect.

Why does the strip change direction constantly?

Now connect up the signal generator (take care not to draw too much current from this – keep the amplitude small). Now you can vary the frequency and hear different sounds. But the principle is the same.

So now you know how to get movement: arrange a current-carrying conductor at right angles to a magnetic field. There is some more cunning engineering to be done to convert this to a spinning motion.

All of our everyday activities, whether driving to school, doing the washing-up, or going for a walk, have a cost. The cost we...

Why so many transformers?

Controlling the rate at which energy is shifting (the power) has been, and remains, a central concern of technology. Directing...