Some insulating materials when separated from the surface of others, leave those surfaces electrically charged, each with the opposite sign of charge and with a high potential difference (p.d.).

A machine to make charges was invented in 1929 by a young American called Van de Graaff. Huge machines, some over 30 m high, based on his ideas have been built to produce extremely high potential differences.

A flexible belt made from an insulating material and running continuously over two rollers can, by the same process, produce a supply of charge where the surfaces separate. The two rollers have to have different surfaces (often acrylic and metal) and together with the belt-rubber, are chosen by experiment.

Charges are “sprayed” on to and removed from the moving belt by “combs” situated adjacent to the rollers. Actual contact between the combs and the belt is not essential because of the high potential differences. Combs can be simply a stretched wire, or a sharp or serrated edge: action depends on very high potential gradients due to their small radii (similar action to lightning conductors).

The lower comb is maintained at or close to earth potential and is a drain for negative charge, leaving the belt with positive charges that are carried up to the top comb. 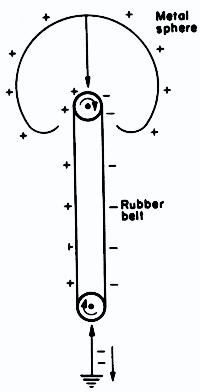 The top comb is connected to a collecting sphere which, having inherent electrical capacity (proportional to its radius) will collect and store the charge on its outer surface until discharged either by breakdown of the surrounding air as a spark, or by conduction to an adjacent earthed object.

So long as the belt continues to move, the process continues, the drive (motor or manual) supplying the power to overcome the electrical repulsion between the charges collected on the sphere and those arriving on the belt.

The charging current is usually a few mA and potential difference achieved by “junior generators” will be 100-150 kV and by “senior” generators up to about 300 kV.

The mechanical arrangement of the belt/roller system is very simple. The lower roller is driven either manually or by motor. The former usually involves a hand wheel and pulley with belt-drive; this pulley can be mounted directly on the motor spindle. In “junior” models, fixed speed, shaded-pole induction motors are usual; “senior” models often incorporate small H.P. variable-speed (sewing-machine) motors, with carbon brushes, control being by either a simple rotary rheostat or a solid state circuit. The motors, control switches and mains input socket are housed in a metal or plastic enclosure, although some junior models have used a transparent plastic cake-cover.

The support column for the collecting sphere can be a simple PVC plastic rod or acrylic tube or a pair of acrylic strips with separators. In some models the belt is enclosed within a plastic pipe with “windows” along its length. Not all generators have means of adjusting the separation of the upper and lower rollers i.e. the belts have to be tailored for a particular machine.

Since the diameter of the collecting sphere determines the maximum p.d. (voltage) achievable, large spheres are mounted on taller columns to be more remote from the earth motor and control box.

Machines are usually supplied with a “discharger", often another, smaller, sphere mounted on a metal rod that has to be earthed to draw sparks from the collecting sphere.

Faraday’s cylinder to show electric charge resides on the outer surface of a charged hollow conductor.

Bouncing ball. Suspend a conducting ball a non-conducting thread. When the ball touches the charging sphere, it will become charged and be repelled away from the sphere. If the ball is then allowed to discharge (touching an earthed surface, or leaking charge to the air) it will be attracted once more to the sphere, to be recharged ... and so the process continues.

The head of hair is another demonstration of repulsion. Real hair or shredded paper strips bunched at one end are used and provide a sensitive means of detecting charge.

The electric wind is produced by release of ions at the end of a pointed conductor and is enough to deflect a candle’s flame.

Hamilton’s mill utilizes the electric wind at the pointed ends of four arms to cause rotation about a pivot. This is similar to the action of a lightning conductor, which allows charge transfer at sharp points.

Kinetic theory model You can show random motion of metallic balls continuously affected by repulsion and loss of charge within a transparent vessel.

Neon indicator shows luminous discharge from the gaseous excitation by the high electric fields near the generator.

An apparatus note on the Van de Graaff generator gives information about good housekeeping and repairs:

These demonstrations show different ways of detecting and counting ionisation. This...

These experiments assume students already have experience of currents through metal...

Hill diagram as a model for potential difference

Scientists often speak of a coulomb ‘falling through’ so many volts and transferring so much energy. That is rather like a 1...

These motors have separate power connections: one for the rotor (armature) and one for the field coils, usually via 4-mm...

Model of ions in motion

Demonstration: a visual model showing that particles with one charge move in one direction, while those with opposite charge...