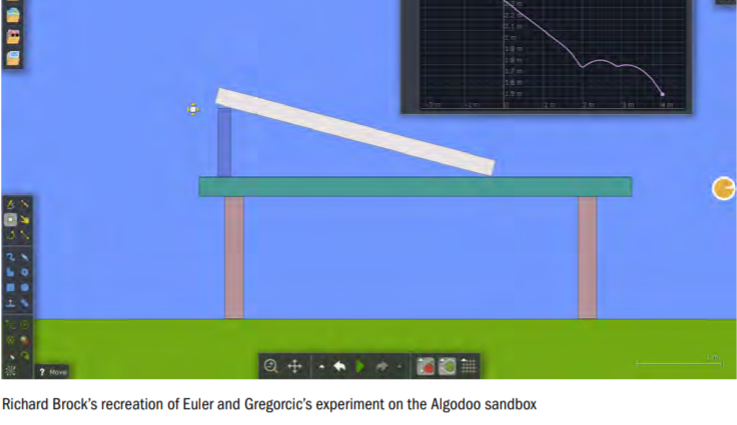 In our June 2020 column, we looked at research on the effectiveness of simulations in general for supporting student learning in physics. Here we discuss a particular form of simulation, the sandbox, which allows students to explore physical phenomena in an open-ended way

Researchers have hypothesised that the concepts taught in physics are hard to acquire because they can differ from our experiences of the world, for example, students do not encounter friction-free surfaces or light inextensible strings! Socalled microworld simulations, in which students can engage with simulated objects under controlled conditions, for example, in the absence of air resistance, have been proposed as a useful way to develop their intuitions.

One freely available physics sandbox simulation, Algodoo, allows students to create cartoon-like two-dimensional simulations of physical situations. The software allows, for example, the forces acting on objects to be visualised and graphs of various variables (including velocity and acceleration against time) to be plotted. It also allows students to change variables that are not easily controlled in classroom practicals, such as the coefficient of friction and the gravitational field strength.

Research into the use of sandbox simulations is at an early stage, but a paper by Elias Euler and Bor Gregorcic hints at the usefulness of such technology in the classroom. A challenge of learning physics is that it can be hard for students to draw links between their experiences with physical objects (such as pucks and ramps) and the abstract symbolic representations used by physicists (such as a velocity time graph of the motion of the puck). Euler and Gregorcic suggest that a digital learning environment can act as a bridge between the physical world and the formalisms of physics.

The researchers describe a study in which two students used Algodoo alongside some physical apparatus (a hockey puck sliding down a ramp on a table) and were videoed by the researchers. They were set the task of discovering the relationship between the height of the ramp and the horizontal distance the puck travels from the end of the ramp till it hits the floor.

They describe a discussion between the students, focused on a graph they had created in Algodoo displaying the x and y position of the puck. The ramp is set up such that there is a short stretch of table between its end and the edge of the table, and the students discuss whether the horizontal distance the puck travels should be measured from the end of the ramp or the edge of the table. The students use the virtual world, with its simulated model of the ramp and table, to determine the meaning of the point of zero-displacement on the graph. This negotiation of different forms of representation (the physical and symbolic) is reported to have occurred without formal instruction by a teacher about the nature of different representations.

Whilst the authors caution that their data arise from a single case study, they speculate that the ‘messiness’ of an open, sandbox simulation like Algodoo may encourage learners to explore their understanding in ways that don’t occur in more structured traditional teaching environments.