When using CO2 and dry ice it is essential to have good ventilation to the room.

In all of the following experiments, the magnetic pucks should be pushed gently to avoid their being chipped and thereby damaged.

The glass plate must be very carefully cleaned with ethanol and carefully levelled using the wedges supplied with it. The CO2 pucks are themselves the best ‘spirit level’ when adjusting the wedges.

About two or three cm 3 of solid CO2 are placed underneath the puck, which will float on a layer of gas as the solid CO2 evaporates.

To avoid troublesome condensation of water vapour on the glass plate, it is advisable to work with the laboratory windows open.

The camera is attached to the supporting frame set up over the glass plate. The motor-driven stroboscope is put in front of the camera.

Alternatively, a camera gantry can be improvised using laboratory stools and a trolley runway.

Two bright lamps (up to 500 W) are used to illuminate the pucks at a glancing angle from the floor. They should not cast a reflection from the glass plate through the strobe disc into the camera.

An alternative way of illuminating the pucks is to place a small flashing light on the top of the puck. The home-made flashing light used to take the photograph has a 'lop-sided' mark space ratio so that the time for which the light is off can be marked accurately. The time intervals for the light off period can be calculated from the electronics or measured using a xenon strobe. For most measurements it is enough to know that the time intervals are constant before and after the collision and so the number of light offs is proportional to the time taken.

A metre rule needs to be visible in the photograph if measurements are to be taken, however, the distances moved are proportional to the length of the light streaks and so actual measurements are not really necessary.

The pucks can be either: 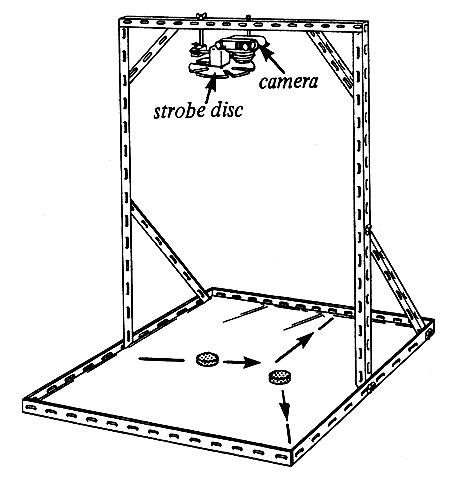 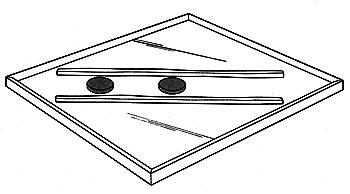 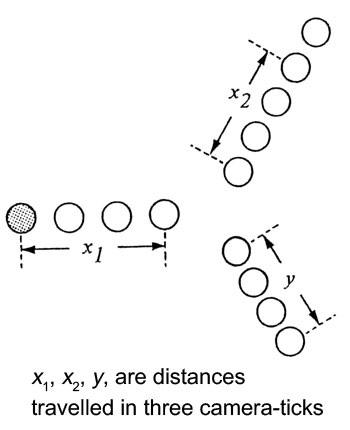 Momentum, a vector quantity, is conserved in interactions such as collisions and...

Class practical: A simple experiment to illustrate the conservation of momentum.

Demonstration: An illustration of a collision with invisible forces.