What's the difference between radiation, contamination and irradiation?

Wrong Track: Radiation was given out from the ruined reactor at Chernobyl, travelled through the air and got into the grass in North Wales and on the Lakeland hills in Cumbria, so affecting the sheep.

Right Lines: When the explosion occurred at Chernobyl, the resulting fire sent a huge plume of radioactive dust or fallout into the atmosphere over an extensive area. The plume drifted over large parts of the Western Soviet Union and much of Northern Europe, including North Wales and the upland hills of Cumbria. This radioactive dust settled and was ingested by the sheep as they nibbled away at the grass. In this way, accumulations of radioactive material built up in the bodies of the sheep, creating a danger for anybody later eating meat from those sheep.

Teaching about radiation contamination and irradiation 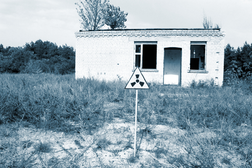 This teaching and learning challenge is related to the previous one. If students are not clear about the difference between radiation and radioactive material, confusion between the processes of radiation contamination and irradiation is likely to follow.

The difference between radiation contamination and irradiation can be made clear by drawing upon examples such as the Chernobyl accident.

An atom or molecule is ionised by having at least one electron stripped from it:

Temperature and the activity of a radioactive so...

The fundamental point to stress here is that external conditions, such as temperature and pressure, have no effect on the...