Measuring magnification by direct comparison of object and image.

The mains lampholder must be fitted with a suitably-fused 13 A plug. It is best if the batten holder is one of the safety pattern where inserting a bulb operates a switch. 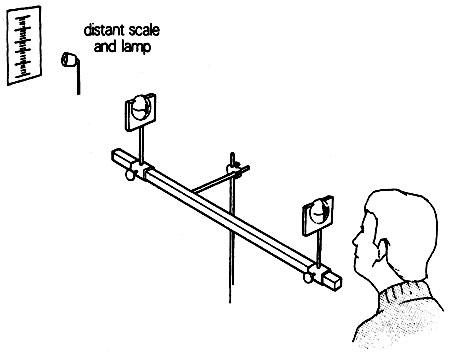 Each scale should be vertical, with horizontal lines on it to act as an object when the magnification is estimated. A strip of shelf-paper can be used, or one or two sheets of A3 paper taped end to end. Rule thick horizontal lines on it every 10 cm, to make a coarse scale. The lines should be numbered. The experiment is easier if successive lines are drawn in different colours.

It helps if the room is three-quarters blacked out. Since the scale is vertical, it may be viewed obliquely, so telescopes may be spread out at the other end of the room.

This experiment was safety-tested in February 2007

These experiments enable students to construct and experience for themselves a...

Class practical: Making a model microscope and measuring its magnification.

The aim of producing a model telescope is success, even though students will probably need a lot of help from a teacher who...