In a static situation, tensile stress refers to the stress in a material when equal forces are applied to each end of the material so as to stretch the sample without bending it. Similarly, compressive stress refers to a situation where equal forces are applied to each end so as to compress without bending. See figure 1. Tensile and compressive stresses are uniform across the material.

Figure 1:A bar is in tension (a), and in compression (b). In each case, F is the magnitude of the force acting upon each end.

If a force of magnitude F is applied at right-angles to an area A, then the tensile or compressive stress is

Stress and pressure
You may sometimes find that the term pressure is mistakenly used in place of stress. This often happens when one solid surface experiences a force by being in contact with another solid surface. A common example is the analysis of the relative sizes of the dents made in a wooden floor by a person in stiletto heels and by an elephant. This analysis often refers, erroneously, to the relative ‘pressures’ under their feet. This cannot be the case because pressure is a feature of liquids and gases and it acts in all directions. Therefore, when one solid surface is in contact with another one, the analysis will not involve pressure. The analysis ought to be:

The elephant is heavier than the person. However, the elephant leaves no mark on the floor but the person does. The heavier elephant causes less damage because it produces less stress in the top layer of the floor – where its feet make contact. The stress is less because the contact force it exerts is spread over a larger area: 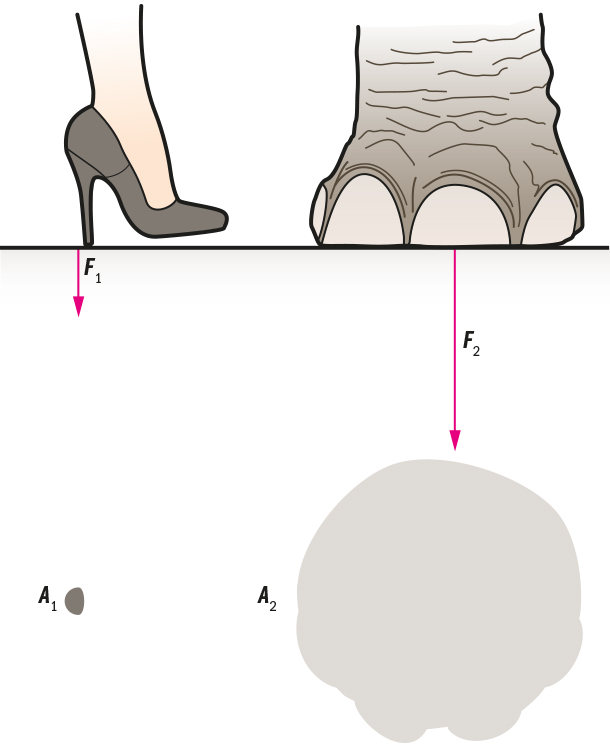 Figure 2: A person in stilettos exerts a relatively small force, F1, over a very small area, A1. An elephant exerts a large force, F2, over a much larger area, A2. The resulting stress under each foot is indicated by the shading of the contact area.

A less-simple picture of stress
The simple picture of tensile or compressive stress shown in figure 1, in which two equal opposing forces act uniformly over an area and produce some deformation along their line of action, is an oversimplification. Even if the forces are uniformly applied and are exactly aligned, there is some deformation transverse to their line of action; for example, stretching a wire reduces its diameter as well as increasing its length. Also, forces are rarely applied uniformly over the cross-section of a sample, so stress varies with position.

If opposing forces upon a material sample are not aligned, then they produce a torque, rotating the sample rather than stretching or compressing it. If there is an opposing torque of the same magnitude, then the sample will be subjected to a shear stress as in figure 3. Shear stress is defined as FA, with F and A as shown in figure 3.

***Figure 3: An object is subjected to a shear stress. Pairs of equal and opposite forces (black arrows) act upon opposite faces. ***

A sample may also be subject to torsion (twisting), which happens when it is subjected to opposing torques that do not act in the same plane.

A full description of the way that an object responds to stress is therefore complicated, even when the object is a uniform sample of a material. The size and direction of any forces inside an object may vary with position throughout the object; the resulting deformations also vary and are not solely in the same direction as these forces. Advanced mathematical techniques are required to represent and analyse the situation.

Both the tensile and compressive strength may need to be considered when selecting materials for use in a particular application. For example, a civil engineer designing a bridge needs to know which parts will be subject to tensile stress and which to compressive stress and to select suitable materials. In general metals are stronger in tension than in compression, and the reverse is true for materials such as concrete and brick. Table 1 lists some typical values of ultimate tensile and compressive stress. These are the values at which the materials will fail mechanically.

Food scientists study the mechanical properties of food and have calculated the Young’s moduli of a range of foods.

But what about solids? Pressure and stress

The whole of this section so far has focused on pressure in liquids and gases. What about solids? The simple expression for...