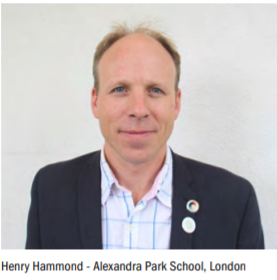 Henry Hammond describes himself as a mediocre physics teacher who is always borrowing ideas from others. But since 2013, when he joined Alexandra Park School (APS) in north London, the number of students doing physics post-16 has jumped from 25 to over 100. So he must be doing something right.

The school was a specialist science and maths academy. It established the sixth form just 16 years ago, with an ambitious plan from senior leadership that has seen it grow to over 600 students this year. Henry was recruited to boost the numbers studying physics and he did just that. This has also meant boosting the teaching team from 1.5 to 7 members – the same staffing level as some of the most exclusive private schools.

“It all comes from leadership supporting us,” he explains. “The head is very good at recruitment. Once he’s recruited, you’re the expert at the subject and teaching, and he believes you’ll deliver the best lessons if you own them. It’s very different from places where staff are lumped in with rules for students.”

But there are more secrets to APS’s success with post-16 physics. Firstly, the school is linked in to every form of physics teacher CPD and support available. Henry was an Ogden Trust teacher fellow and is now national secondary lead for the Trust, whilst the school is a partner school. It has run Teacher Subject Specialism Training courses for science teachers without a physics background and works closely with local IOP teaching coaches.

Students are not required to take maths alongside physics A-level and there is a physics-rich BTEC in applied science. The school’s physics club is vertical, encouraging older students to work with younger ones and is designed to be fun rather than just a revision session. The STEAM club is for year 7 and has been led by physics teachers for the past six years.

In 2018, the school created a bursary access scheme, offering £500 to girls and those from disadvantaged backgrounds taking a physics or chemistry A-level. Henry says that the bursary isn’t seen as a standalone project in the science department.

“Budgets are tight,” he admits. “However widening access to education for underrepresented groups is important to us.

Finances are managed prudently and used to actively meet our charitable objectives. Our collegiate way of working means departments across our school encourage each other and share ideas on how to improve uptake of their subjects. Offering the STEM bursary is one such opportunity.”

Other initiatives have included free exchange visits as part of the Mandarin Excellence Programme in the languages department, fully-funded work experience placements in healthcare courses and subsidised instrumental tuition in the music department.

There is still some way to go. The proportion of female A-level physics students still hovers around the national average at just over 20%. Although more than a third of their physics students are from a BAME background, this is lower than the overall proportion in the sixth form. And when students move from studying four A-levels to three at the end of Year 12, there are still some who choose to drop physics in favour of one of their other subjects.

But Henry’s dynamism and the team around him are a recipe for success, recognised by the IOP this year as a winner of an IOP Teachers of Physics Award. Henry remains modest: “I love physics and getting students to understand it. I have to work really hard to understand some bits though. Maybe that’s what makes it work - students can see my brain working hard. Year 13 are now better at physics than me, I just have 15 years of examples.”

Read about all the IOP’s 2020 award winners at