In this post, I will pick up on the third point in the list from An Opportunity for Change, the use of start and end points in an energy analysis.

In many ways, this is the strongest recommendation that I will make. Of all the changes in the way that we talk about energy, this is possibly the easiest to implement and the one that can have the biggest effect on cleaning up the language. Many other improvements flow from it. Even if you do not adopt all of the ideas of SPT, you will find it helpful to refer to and define start and end points in your energy discussions.

A typical exam-style question might be to describe the energy changes as a man (Sisyphus) pushes a boulder up a hill.

There are various other alternatives.

However, what is clear is that there is no single, unambiguous answer on which everyone will converge. I’d suggest that this lack of a convergent answer is un-science. It arises because an energy discussion cannot provide any insight into or explanation of the journey. And we should not be drawn into mixing energy terms into the discussion of the journey. This relates to the suggestion in the previous post to separate the explanation from the energy analysis. But it goes further. The energy analysis is only useful for comparing two (or maybe more) fixed points on the journey – not for discussing the continuous process of climbing the hill.

The most obvious fixed points to choose are the start and end of the journey.

As we saw in the last post, the purpose of an energy analysis is to do calculations. So energy is a useful tool to invoke if we wanted to know how many chocolate bars he has to eat to ascend the hill; for which there are two important points in time: before he begins his climb and after he has finished it. So we have a:

start point: at the bottom of the hill

end point: at the top of the hill.

We choose these two points because they will be useful in an energy analysis. And, once we have chosen them, the analysis is unambiguous:

We might show these changes on a bar chart. 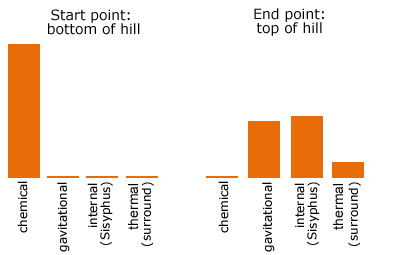 The language above is a bit cumbersome for Key Stage 3. Phrases like “the energy associated with the gravitational field...” do not lend themselves to basic discussions with 12-year-olds. One way around this is to use the idea of energy stores. This is an idea that is developed in the Supporting Physics Teaching (SPT)resources.

The terminology of stores 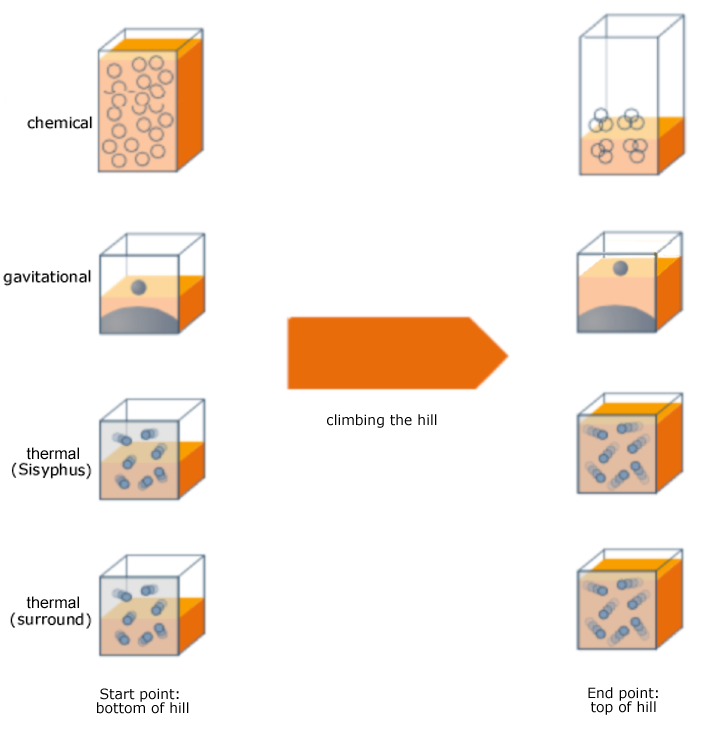 This is explicitly and knowingly representational. There is no suggestion that there really is an energy store with orange stuff in it. But that that this is a useful way of illustrating that there is energy associated with the chemical at the bottom of the hill. We have found that the language of stores is a helpful way of introducing energy at Key Stage 3. It is up to you whether you adopt this language completely. You may prefer to take on the idea of start and end points without adopting the language of stores – and that is perfectly possible. Although the idea of stores can work and it provides a break with the past, you have to feel comfortable with whatever paradigm you adopt.

Other advantages of start and end point analysis

We have seen that defining a start and end point in an analysis gets rid of ambiguity. However, you will notice that it has also eliminated the reference to kinetic energy that appeared in the unscientific approach at the top. Let’s think why kinetic energy has dropped out of the analysis and also why that is a good thing. Although Sisyphus is moving, his kinetic energy is (a) constant and (b) transient. Its value would not affect any of the final values; so it would not form a part of any calculation. At the start, he is stationary and at the end he is stationary. At each of our snapshots (start and end) he has no kinetic energy. So we can ignore it in the analysis. This is helpful because it was, after all, a distraction in the energy chains at the top of the page.

An even more transient kinetic store

What is the energy analysis for a car journey – let’s say from London to Birmingham?  I am going to use the three step approach from the previous post. Our start point is London. And our end point is Birmingham.

During the journey, the engine gets hot and heats the surroundings. Also, the car does work to push air out, thereby raising the temperature of the air (and the outside of the car) – by a very small amount. Every so often, we have to brake – to slow down. The friction in the brakes raises the temperature of the brake blocks and discs and, in turn, these get hot and heat up the surroundings.

When I get to Birmingham, I have used up some petrol (and oxygen form the atmosphere) and have raised the temperature of the car, its engine and the surrounding air – albeit by a small amount. I have also increased the amount of carbon dioxide in the atmosphere. 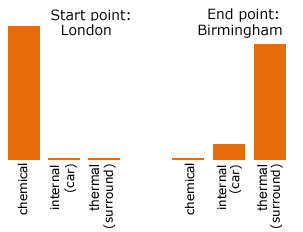 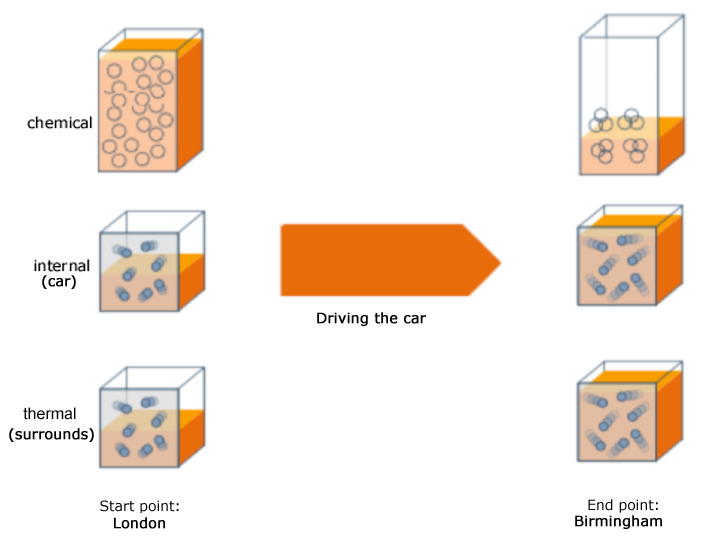 Notice again that there is no reference to kinetic energy because it was constant and transient.

Remember that we choose the end point that is most convenient for a useful energy analysis. The analysis above might be useful if we needed to know how hot the engine might get. However, we could choose an end point sometime after the car has stopped. By which time the engine will have cooled and heated the surroundings some more.

As with Sisyphus, the energy analysis tells us nothing (and cannot tell us anything) about the journey itself. In terms of energy, a car journey is distressingly simple: it empties a chemical store and fills up a thermal store of the surroundings. All of the explanations of processes and mechanisms (how the car works, how it raises the temperature of the surroundings etc) appear in the middle part of the three part analysis.

A model of vibrating atoms in a solid

Demonstration: This model shows atoms making up a crystal held together by spring-like forces.

A wonderfully detailed list of the energy expenditures of various activities has been produced.