Standing waves with a variable wavelength

Three different experiments show standing waves having more than a single wavelength. To explain why each system behaves as it does, students need to understand both the factors affecting wave speed in a medium and also the relationship between wave speed and wavelength, for a given frequency.

Hanging chain: Chain sold for securing bath plugs is suitable. It is easiest to swing the top round in a small circle to generate a wave, but it will be clearer that a standing wave is involved if the top is oscillated sideways.

Rubber strip of varying width: Rubber cot sheet is a suitable material. Cut the sheet with a razor blade along previously marked lines, while it is being held down and lightly stretched. A piece 0.5m long, tapering from 100 mm to 10 mm, is about right. A line drawn down the middle helps to make the motion clear, especially as the edges of the strip tend to flap. Stroboscopic illumination along the length of the strip is very effective. Use as large an amplitude of oscillation as can be managed.

Safety note: Using the xenon stroboscope, teachers should be aware that frequencies around 7 Hz have been known to cause epileptic fits in certain people. Ask your students if any know that they are susceptible to this response. 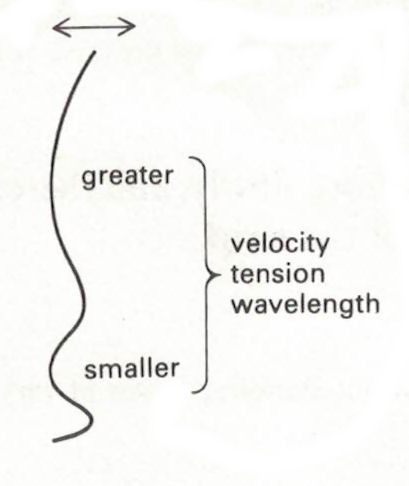 Demonstration and class experiments of standing waves provide a key link to musical...

Stationary waves in an air column

Demonstration: This experiment, using what is often referred to as Kundt's tube, demonstrates vividly how sound waves make air...

Experiment: This experiment could supplement a few demonstrations about standing waves, with students playing their own...