The standard model of particle physics sorts elementary particles according to their respective charges and describes how they interact through fundamental interactions. It is, like any theory, an analogy of nature. The mathematical models we construct to explain what is seen in experiments draw upon analogies outside of maths. Using LEGO to teach this topic provides a tangible way for students to understand what is probably one of the most abstract parts of the 16-19 curriculum: which combinations of colourcharge are stable

Forces are exchanged between particles which have properties known as charge, and each force has its own associated charge. Most familiar is that of electric charges. All electric charges are given either a positive or negative number with charges of the same sign repelling each other while charges of opposite sign attract. These positive and negative numbers are themselves just an analogy to explain electric charge and the electrostatic force that acts on particles. There is no deeper meaning to a positive or negative charge other than this number line analogy - posing much frustration when teaching conventional current!

There is also an analogy to explain the way quarks and antiquarks combine to form baryons and mesons. The analogy here is more complex than a single number line due to the underlying force. It is the strong force that dictates how quarks must group together. The associated charge is not explained through numbers but instead the primary colours of light of human vision: red, green and blue. Strong force is experienced only by quarks and antiquarks who all possess this strong colour charge.

Colour neutrality can occur in three different ways and this leads to three types of particles: baryons, antibaryons and mesons. My favourite way to introduce this idea is to combine light mixing demos with LEGO (see above).

And once your students understand additive mixing they can construct various particles and so go beyond the curriculum by reasoning through which combinations of quark and antiquark we will see in nature. 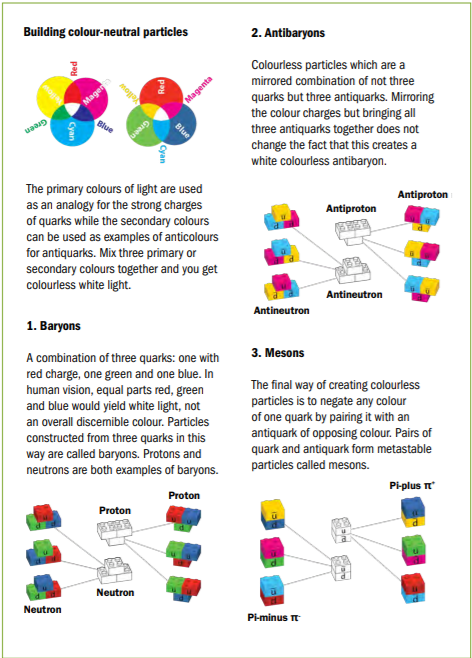 Dr Ben Still is a teacher and Head of STEM Partnerships at St Paul’s School, Visiting Research Associate at the School of Physics and Astronomy Queen Mary University of London, and author.

For videos and resources on using LEGO to explain particle and nuclear physics, visit