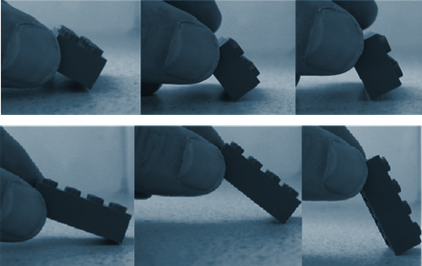 Stability can be connected to the turning effects of forces. Here is how.

Thinking about the turning effect of a force can also shed light on why some things are stable and others not. Tilt a toy building brick along one of its long sides, then let go. How far can you tilt it before it does not fall back to its original position?

Try again with a longer side.

A simple and useful measure of stability is the maximum angle to which you can tip something with it returning to its initial state once you let go. If you tilt the object only a small amount, the force of gravity acting on the object is still turning it back to its original position. However, if you tilt beyond a certain angle, the force of gravity is now turning the object to a new position. The object will no longer fall back onto its base but will now fall onto its side.

Think about these situations for three vehicles viewed from end on. Which of the vehicles will tip over?

A helpful way of looking at this question is to say that things are stable so long as their centre of mass (through which the force of gravity acting on the object acts) lies within their footprint.

If an object is tilted and the line of action of the force of gravity falls outside its footprint, the object topples over.

So the centre of mass of an object is connected to the turning effect of forces.

The centre of mass of the book is where the particle that represents the whole book collapsed to a single point would be.

When asked about the speed limit on the motorway children will readily use the language of 70 miles per hour . Speeding...

This is a quick demonstration to show that levers can be used to generate large forces from small forces.

A force replaces an interaction, so model the interactions first, and then introduce the forces later. Try to avoid talking...