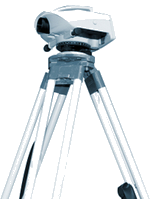 The speed of light is constant. It is the same everywhere, and is the top speed: a universal speed limit. The way we measure distances now depends on this speed: the speed of light has been defined as 299,792,458 metre inverse second since 1983. So a metre is now how far light travels in 1299,792,458 second.

In more easily visualisable terms, one foot (approximately a 30 centimetre ruler) is very nearly the distance light covers in a nanosecond (one thousand millionth of a second, or 1 × 10-9 second).

But light is also used to define straight lines. In laser surveying, for example, beams of light are laid out across an archaeological site to define a regular grid. All other things being equal (that is, if the refractive index of the medium does not change), a beam of light reliably shows a straight line.

So the fastest way from A to B is always by electromagnetic waves, as these travel along a straight line, and at the top speed. That is, the shortest trip time is always the one taken by light or any other electromagnetic wave. Any path other than a straight line will take longer, as distance is converted to time at a constant rate, by the universal converter, the speed of light. This all seems far too obvious, and fine in a vacuum (where all other things are always equal), but there are two problems.

How does the light know what the straight line path will be before it arrives? That is, why does light travel in straight lines?

Under some circumstances, light clearly does not travel in straight lines. When all other things are not equal, it certainly does not. You might, for example, put a prism, or mirror in the beam. What then happens to the principle of shortest trip time?

These are both good questions as they seek yet deeper reasons for things that you may not have previously questioned.

After all, a wave is essentially a regular vibration of given frequency and amplitude, that is connected to other vibrations, so that the pattern at the source propagates at a certain speed: the delay between the source and the mimicry of the source by the detector is set by the trip time.

Salty foods may warm up slightly more quickly than food without seasoning in a microwave oven.

A lens is a simple block of glass through which light passes: it's refracted as it passes. The block must be very cunningly...