This activity introduces shielding from sound. Here you need to make sure that children can apply the ideas of reflection and absorption to sound, as well as appreciating the reduction in loudness due to spreading out over larger and larger volumes when transmitted. All three of these can be used to plan for reducing the level of sound reaching a detector. 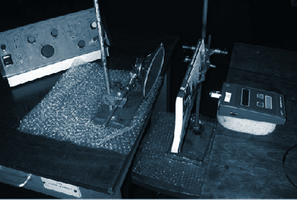 You might start by pointing out that sound often gets where it is not wanted or is much too loud. We are sure the class will be able to provide several examples. You might even brainstorm these, seeking to divide them into situations where people might control the loudness of the sound, and others where they might manage to remove the sound altogether.

Then you might introduce the ways in which sound can be controlled. Once you have set aside reducing the quantity of vibration produced by the source, and reiterated that the vibrations are travelling, point out that you can seek to reduce the loudness of the sound in three ways – by being farther away, so just allowing it to spread out, by hiding behind a reflector, and by hiding behind an absorber.

It is very important that the loudspeaker is isolated from the decibel meter so that the only simple path for the sound to follow is through the air. Beware of unwanted reflections (for example from the experimenters!) Getting valid and reliable results is hard (because of the need to eliminate other paths and background noise – imagine a class of children working all at once), so this is not an easy experiment to give to children as an investigation.

Sounds in the environment

This activity is useful to begin to develop a descriptive language for sound (recognising the many qualities of the sound in...

The speed of sound waves travelling in seas and oceans varies with depth due to changes in temperature and density under the...

Light rays but not sound rays

In explaining the properties of light we suggest constructing diagrams based on light rays, which are imaginary. Rays can be...