Simple variations in temperature on a globe

Here you can show how the top and bottom of a globe are warmed less than the parts facing the source of illumination. 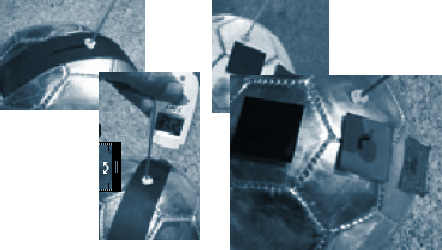 Place the cocktail stick upright on the Equator, and use it to make sure the beams of light are falling straight onto the globe at this point, and directly onto the strip of black paper. Leave for a minute or two, depending on how sunny the day is. Then use the thermometer to measure the temperature from the north pole to the south pole, sketching the variation. You'll find a maximum at the Equator. Ask why this is (direct illumination, so the the warming effect is shared over less area).

Now model summer in the Northern Hemisphere, by tilting the axis of the globe. Use the shortening of the shadow cast by the cocktail stick, now placed at about 40 degrees north, as extra evidence that this is summer. Again measure the temperatures. Now model winter, looking for a longer shadow.

You can repeat the process using thermochromic film, but trials showed this to be less convincing, as it all tends to change colour rather rapidly.

Values in science and Occam's razor

The important point about the photographic evidence provided by a camera pointed at the Pole star is that we cannot decide...

The movement of the Earth and the seasons

This is a simple but effective demonstration of the daily and annual movement of the Earth. The first activity is essential to...

You can use this activity to check pupils' existing knowledge of the daily path of the Sun and present the correct information...

is a type of Main Sequence Star
2023 IOP Awards