Imagine you continue to cut up a magnet into smaller and smaller pieces. If you always found little magnets as a result, you might pretend those little magnets were already inside the big magnet before you started.

Try to sketch a picture of these ‘basic magnets’ in a completely magnetised bar. Start by drawing small rectangular magnets, then change to small compasses as symbols, then omit the round box of the compass and simply show an arrow.

Suggest that the ‘basic magnets’ are already there inside the bar of steel even when it is not magnetised. They would all be pointing in different directions or, rather, they would all be arranged in small closed chains (family groups) pointing head to tail.

The term ‘basic magnet’ is intended to avoid the mistake in early theories of calling the domains ‘molecular magnets’. Tell students, in passing, that there is some structure inside a magnet, though the full story is much more complicated.

The basic magnets are not individual atoms of iron; they are large groups of atoms with all the atoms in a group orientated magnetically the same way. Some of the groups of atoms point magnetically in one direction; other groups point in other directions. The groups are called domains. The domains are far bigger than molecules. They may be big enough to see, or they may be much smaller than that.

The domains are there in unmagnetised magnetic materials too. You can see their boundaries with a microscope when you pour very fine iron filings onto the surface of a sample. The filings collect at the boundaries where the different domains meet, because there are ‘exposed poles’ there. This phenomenon is used in the magnetic method for testing an iron casting for flaws.

In unmagnetised iron, the domains are small and are orientated equally in several directions. When you apply a magnetising field, you can drag the magnetisation of the domains round into a new direction. The favourable domains, those whose natural direction of magnetisation is near to that of the field, are encouraged to grow at the expense of the shrinking of the unfavourable domains magnetised in the wrong way. Thus the bar becomes more and more favourably magnetised along directions near to the general direction of the field. A bit like a country growing and spreading its boundary into neighbouring countries!

In the later stages of magnetising, the domains are large and many of them are in the favourable direction. But their magnetism will still lie along directions that fit ‘crystal axis’ directions. Then, as saturation is approached, a strong magnetising field may wrench the favourable domains’ magnetisation round nearer to the direction of the field itself.

With iron powder on the surface of a steel sample under a microscope, you can see the domain boundaries moving as we increase the magnetising field.

The domains make their conquest of territory with little vibrations of growth and shrinkage. Amplify the output of a search coil, by connecting it to an amplifier or loud speaker. Move the search coil round a specimen which is being magnetised and you will get a hissing sound which is really a succession of small clicks. The clicks just show minor oscillations of the domain boundaries.

How much of this story you tell to students depends on their ability and interest. However, students should be able to answer the following questions.

Teacher: Does the theory tell you what will happen when you cut a magnet in half?

Example Student Answer: Yes, the theory tells us that we shall just find new poles. Isn’t that wonderful? However, it is no credit to our theory whatever. Our theory has just given us back the story we put into it. We found out that by experiment ourselves and used it as a basis for building our theory.

Teacher: Suppose you have a bar magnet with poles at the very ends, just on the faces. What is likely to happen to those poles?

Example Student Answer: Like poles at an end push each other away so we should expect to find the pole regions of a bar magnet spreading from the ends round the corners to the last part of the length. This agrees well enough with what one sees. It suggests the usefulness of keepers holding two magnets of opposite polarity close together to provide a circle of magnetism.

You could also ask about heating and hammering and demonstrate some of these effects. However, modern magnetic materials have become so good that they withstand rough handling. 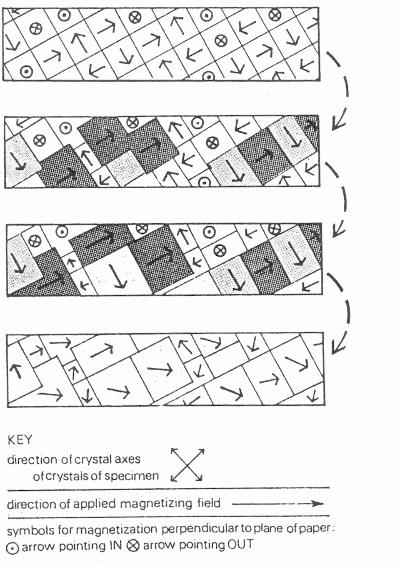 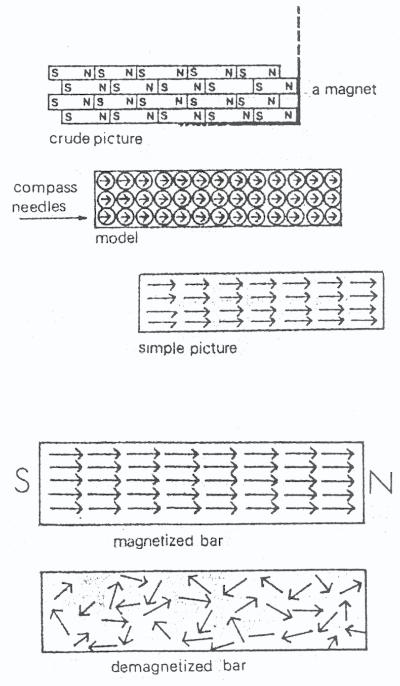 The idea that an electromagnet can be made stronger by…

To introduce the idea of finding the magnetic north pole from anywhere on the Earth.

Putting the model to work

Supposing you have an iron nail. The nail is made from iron, a magnetic material, but it is not a magnet at present. How could...