A second look at the reasons for a 230 volt supply 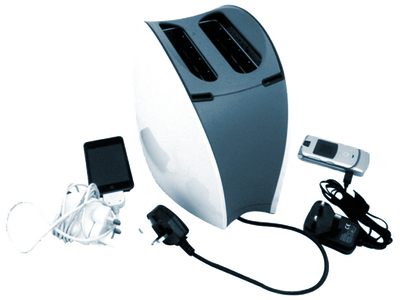 As smaller potential differences seem safer, why not use them? Why not have mains wiring at 12 volt throughout the house, rather than 230 volt? And why shift energy around the country using 11 kilovolt, 110 kilovolt and even 400 kV transmission lines? After all, damp skin and 230 V are best kept apart, as explained in episode 01.

Here we'll build a simple model of a circuit, using what you have learnt about working in series circuits to explain why large-voltage, small-current pathways are better suited to shifting large quantities of energy than small-voltage, large-current pathways. The character of the different pathways determines their possible uses, even though the power in both pathways may be identical.

For domestic distribution, we already know that 230 volt is an upper limit, chosen so that lethal currents are not, in normal circumstances, driven through people. The key question here is why a smaller potential difference is not used. For long–range distribution, from power station to town, why use anything greater than 230 volt, if that is the final required potential difference? The answers are linked, and the simple model used illuminates some of the factors to be considered in engineering a system to shift energy from one store to another store, often very remote from the first, using electrical pathways of different characters.

Here you can do calculations using the simple model. These support an account, using the understanding of series circuits developed in episode 01, to explain how some electrical pathways work better than others for shifting energy where you want it.

As resistance is added, the total effective resistance may increase or decrease–it all depends on the number of loops.

The charged particles are always there - what ru...

When a battery is first connected to a bulb, the bulb warms up and lights up the surroundings. It is clear that something must...

Suppose two bulbs are connected in series and they are not identical. Suppose the resistance of bulb A is greater than the...