This activity challenges students to apply their understanding of seasons to the orientation of solar panels in the UK and Egypt. 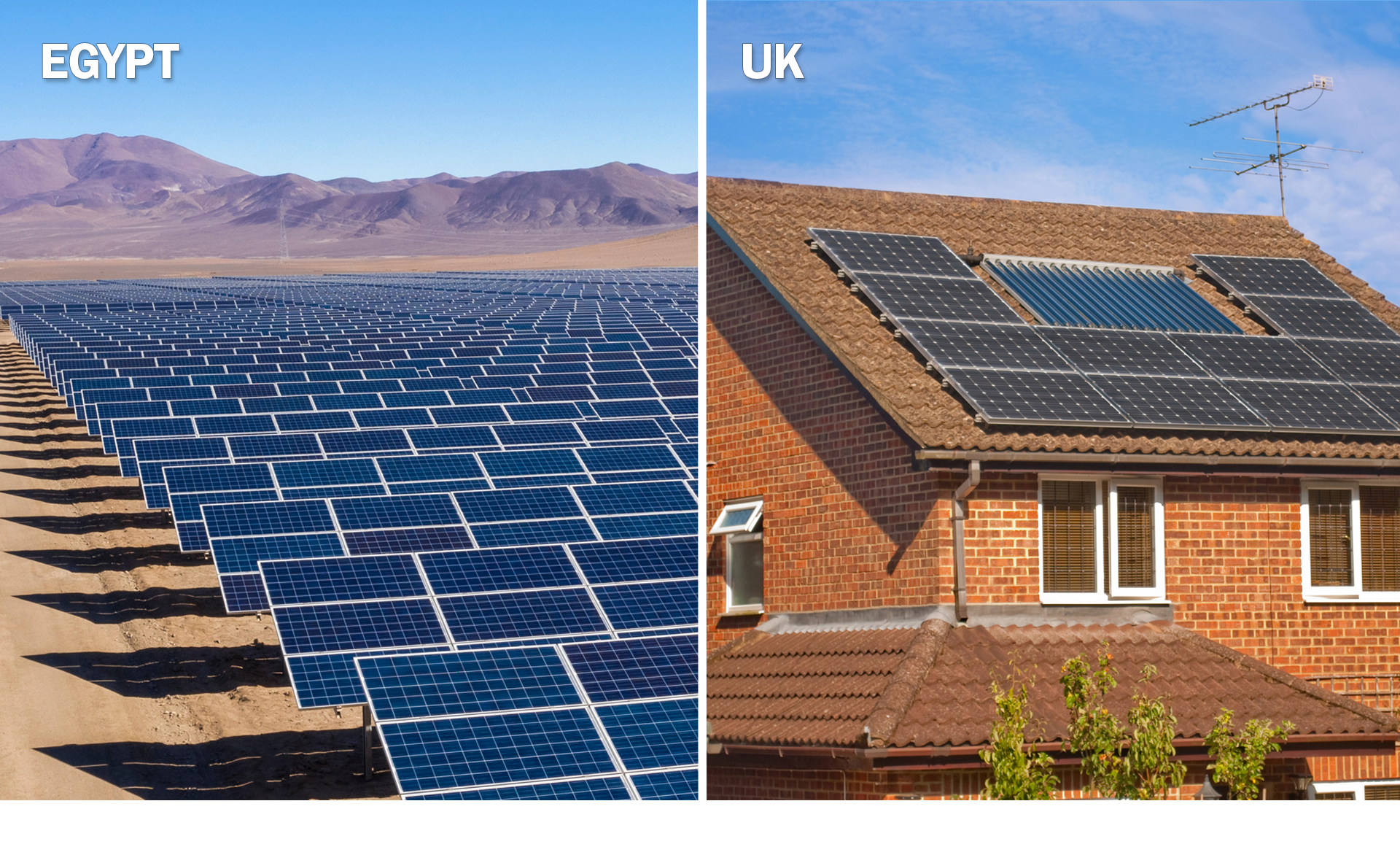 Egypt has an advantage over the UK when it comes to solar power. As well as clearer skies it has large areas of unused land. A huge solar farm has recently been installed at Benban, a desert region about 650 km south of Cairo. Covering an area of 37 square-kilometres it is large enough to be visible from space and is a great example to include in a lesson on seasons.

Before this activity students should know that the apparent motion of the Sun is caused by the Earth's rotation and that its path across our sky changes with the seasons.

Students can explain why the Sun's elevation at noon is higher in Egypt compared to the UK and higher in summer than winter and apply this understanding to the orientation of solar panels in both countries. 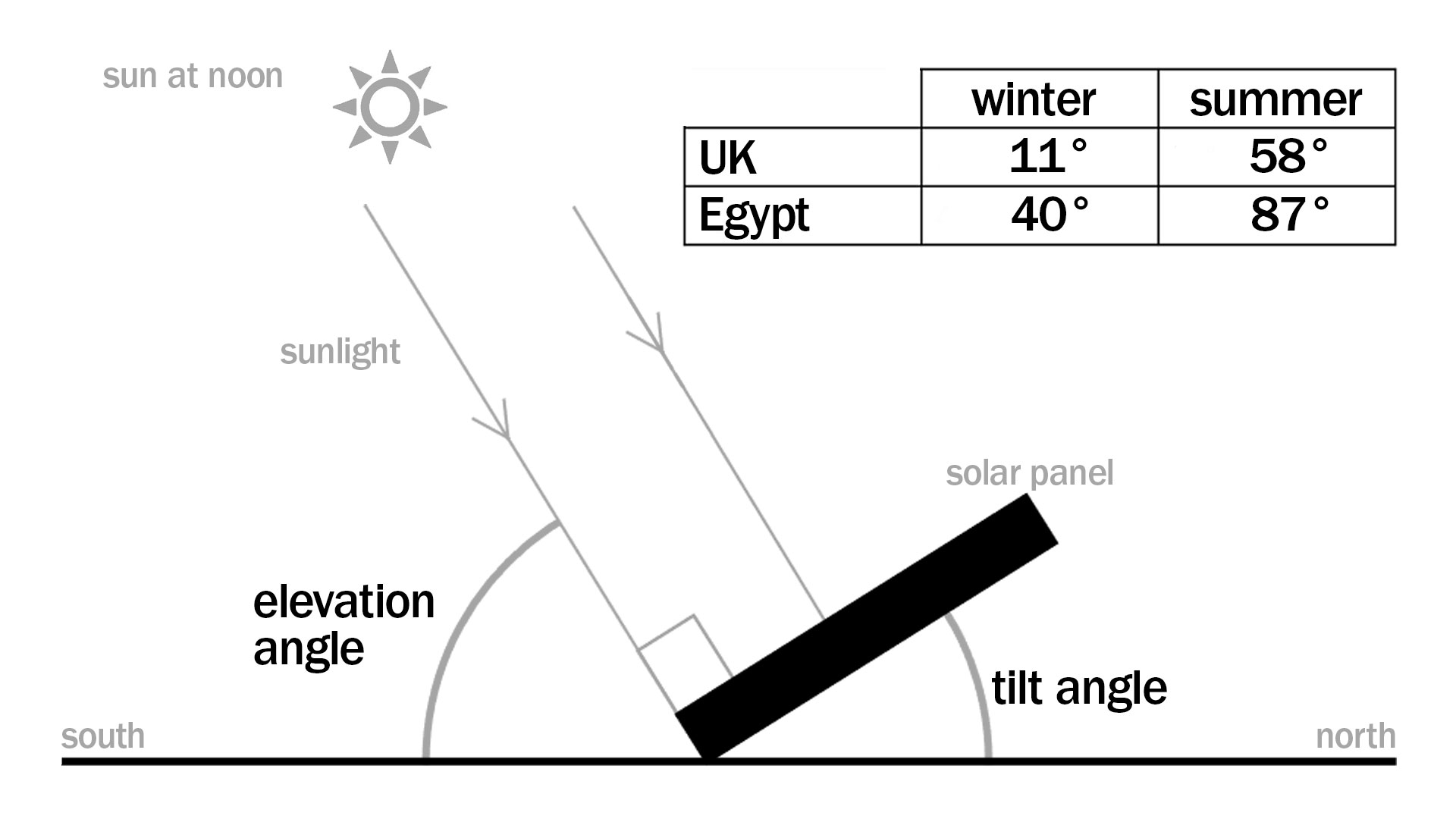 Students can deduce this relationship from the diagram above or you could provide it. Some students may argue that tilt should be calculated using summer elevations because days are longer (but this severely reduces output in winter). Others may suggest that winter days are shorter and so we need to maximise output at those times. Solar panels that track the Sun throughout the day and/or seasons are best for all year performance but the additional cost and complexity means that they are only economical for ground-based systems such as the one at Benbam.

For a fixed solar panel, a good rule of thumb is to use the average of the summer and winter elevations: 34.5° for UK and 63.5° for Egypt. This gives tilt angles of 55.5° for the UK and 26.5° for Egypt. In reality, when mounting on a building the slope and orientation of the surface you are attaching to usually restricts options (eg roof pitch in the UK is usually between 30° and 50°).

Both Egypt and UK are in the northern hemisphere and so solar panels should be mounted facing south. Student explanations of why the elevation is higher in Egypt should refer to the curvature of the Earth’s surface and/or latitude. For differences between summer and winter they should describe the Earth’s axial tilt and motion around the sun. 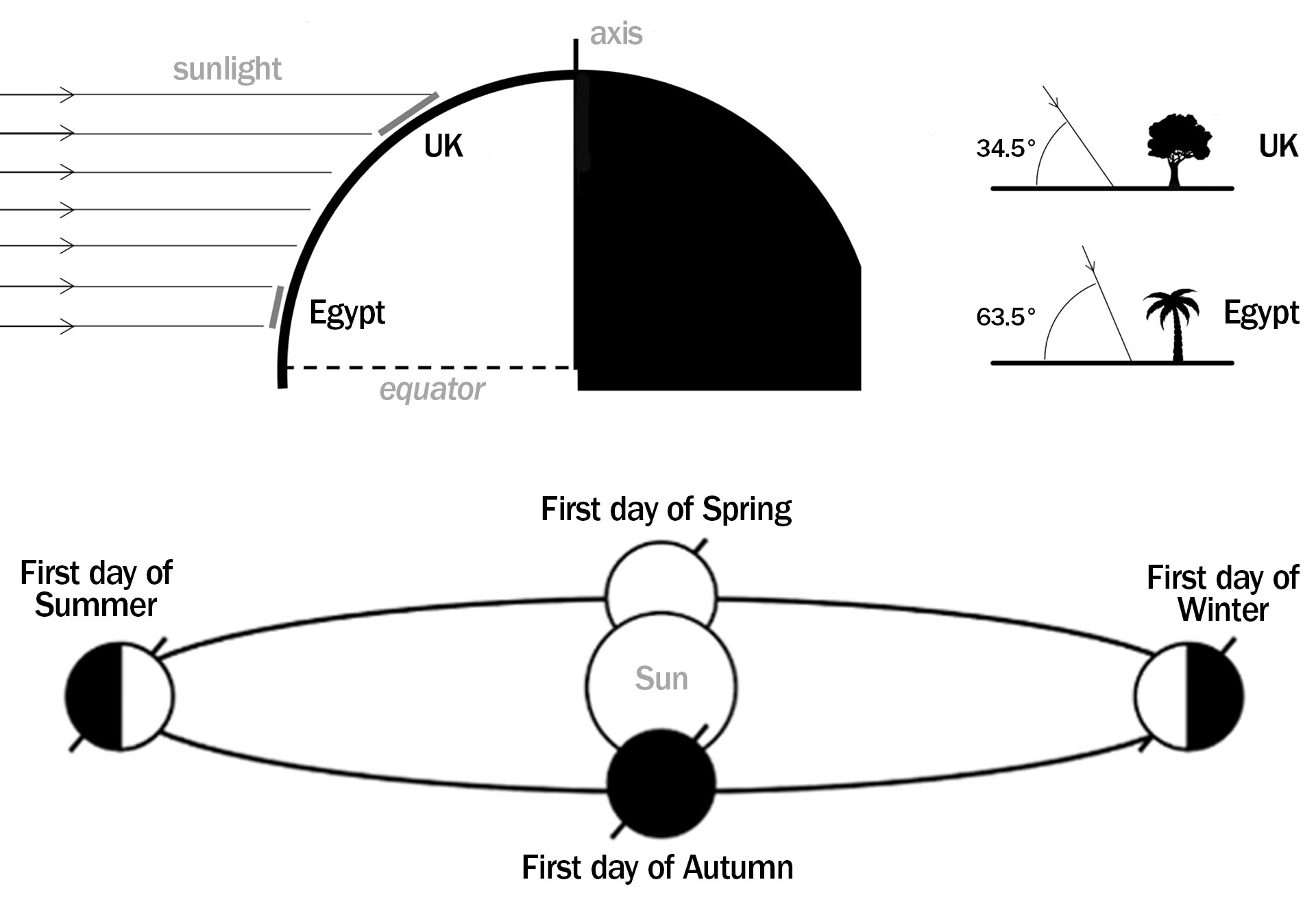 Top: Elevation angles on midday on first day of autumn or spring. Bottom: Earth's position relative to the Sun at different times of year.

Students use a ball and stick to model the motion of a planet around a star and deduce how seasons may be different to those...

Questions for students to complete individually or for use with electronic or mini whiteboard voting.

The seasons - what do we know?

The monthly average temperatures (both the monthly low and the monthly high) vary over the year. At the beginning and the end...