A scientific journey into the past

Vasileios Spathopoulos, of Glasgow International College, used an IOP Anthony Waterhouse fellowship to fulfil an idea that had been developing for a while: to combine his interests in astronomy and history to create shareable classroom resources. Here’s what he did...

My idea was to create activities that would simulate the astronomical observations and measurements of ancient and medieval cultures. To do this, I used the wonderful freeware Stellarium planetarium software. Anyone can download it (or even use the simpler, web-based version), to view a realistic representation of the sky from any location, at any time in the past, present or future. The fellowship provided me with the opportunity to research this field in my spare time and I eventually produced a total of 14 activities.

The ancient Greeks are often looked upon as the pioneers in this field but my intention was to portray the contribution of various civilisations and especially those non-western ones, whose contribution to the development of science is often not emphasised enough. Those completing the activities will thus follow in the footsteps of ancient Babylonians and Greeks, medieval Arabs and Chinese and Indian astronomers.

For example, in 190 BCE there was a solar eclipse visible from the ancient city of Alexandria in Egypt. The great astronomer Hipparchus used recorded measurements from this eclipse to estimate the distance to the Moon. By travelling back in time with Stellarium, you can view this exact same eclipse from Alexandria and estimate how far the Moon is from our planet. 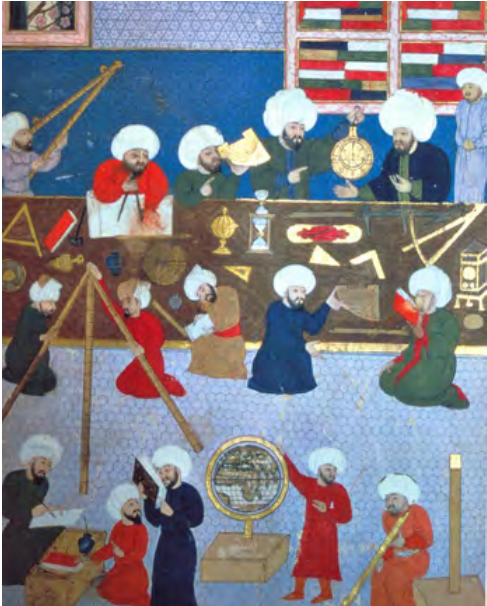 Islamic Astronomers at Work between circa 1574 and 1595

Dowload the resources at

Papers about the resources in Physics Education at