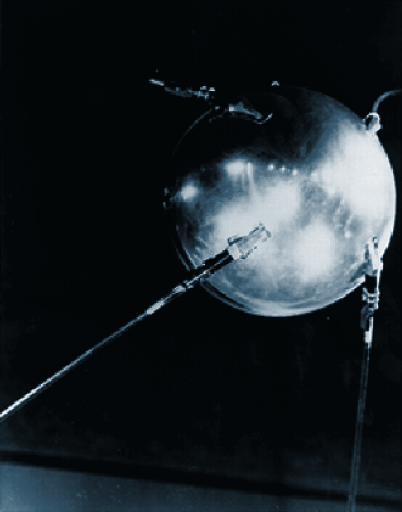 Over the last 50 years, satellites have become as commonplace as other tools of technology before them, such as clocks, telephones and computers. Satellites help us to communicate, navigate, monitor the environment and forecast the weather.

A satellite is any object that moves around another object. So the Moon and Meteosat (the weather probe) are satellites of the Earth, and the Earth is a satellite of the Sun.

Artificial satellites have many uses. The idea of using a satellite for telephone communications was first proposed by Arthur C Clarke, the famous science fiction writer, back in 1945 in the magazine Wireless World. At the time, many people thought that he was mad as they could not think of a way of putting satellites into orbit around the Earth. Yet in 1957, the Soviet Union succeeded in putting the first satellite, Sputnik I, into orbit (image © NASA). People often assume that satellites must be physically big in size. In fact, Sputnik I was about the size of a basketball, weighed only about 83 kilogram, and took about 98 minutes to orbit the Earth on its elliptical path.

The success of Sputnik I was an enormous shock to the Americans and they rapidly accelerated their own space program, launching the first communications satellite, Telstar, in 1962. This was followed by other satellites to explore Mars (the Mariner satellites) between 1962 and 1965, and then landing a man on the Moon in 1969.

But the first step is to explain the circular motion of satellites.

Demonstration: teaching about comets? Bring them to life in class with this memorable demonstration!

Satellites and their uses

Covering the whole of the Earth with communications satellites requires a minimum of three satellites evenly distributed.