Johann Ritter is perhaps best known for his discovery, in 1801, of the rays that subsequently became known as ultraviolet radiation. However, his experiments with Voltaic piles (an early form of battery) are particularly curious.

A visitor to Ritter’s flat described “…a vile and dismal room in which everything possible: books, instruments, wine bottles – lay indiscriminately about”. Ritter “…was in an indescribably agitated state, full of sullen hostility. One after another he guzzled wine, coffee, beer, and every sort of drink.” The events that led to the scientist’s dishevelled state are a warning of the dangers of scientific obsession.

Before constructing a large Voltaic pile, Ritter wrote in a letter to his publisher that: “Tomorrow I marry i.e., my battery.” The comment was a warning of Ritter’s unhealthy dedication to research.

Ritter began to experiment with the effects of the Voltaic pile on his body and discovered it could produce sounds in his ears, colours in his eyes, sensations of hot and cold in his fingers and sneezing fits. Subsequently, he reported that he tested the effects of current on his “organs of reproduction” and “organs of evacuation”. His experiments became more extreme. Ritter studied the effects of remaining connected to a pile for an hour and noted a “dullness in all his limbs” that lasted over a week.

In addition to these experiments, Ritter described the effects of pinning back an eyelid and staring at the Sun: “I have in each eye a place which has no more sense for black and white, and which sees colours reversed: red, blue and blue, yellow or red.”

Ritter died aged just 33. It is impossible to know whether his death resulted directly from his experiments or from the alcohol and opium he took to mitigate the symptoms caused by his dangerous research. 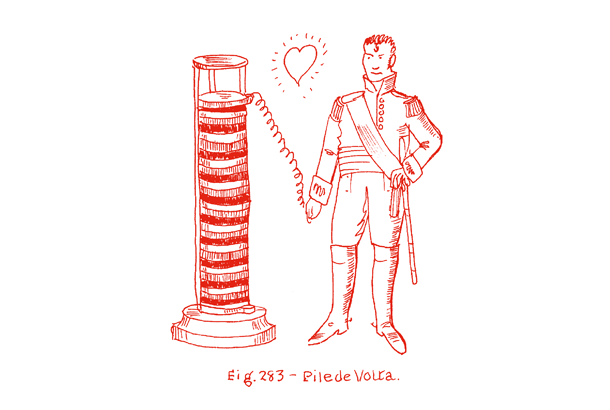 The use of the symbol "I" for current arises from a historical French term. In the 1820s, André-Marie Ampère labelled the flow...

Intriguing factors that affect the severity of electric shocks in humans.

We suggest that you use parts of the circuits here to allow your class to concentrate on two aspects of the behaviour of...