How is the drop in energy in the chemical store linked to the rise in energy in other stores (for a glowing bulb the energy of the thermal store of surroundings increases)?

Let's think about a complete circuit that has been running for a while – apparently in a steady state. Charged particles in all parts of the circuit are kept in motion by the action of the battery. Remove the battery and the charge flow stops – everywhere. As the charged particles pass through the bulb, energy is shifting to the thermal stores of the surroundings. The bulb itself consists of a very thin wire, or filament, inside a glass globe. So long as there is a current in this thin filament, some energy is shifting from the chemical store of the battery and to the thermal store of the surroundings.

How does this happen? As the charged particles (or electrons) move around the circuit, they are constantly being impeded by the fixed array of ions through which they pass. That is why the battery is needed to keep the charged particles moving. However, in the bulb the geometry (very small cross-sectional area) and internal structure (the layout of the ions) of the filament wire combine to make it particularly difficult for the charged particles to pass through (larger forces on the moving charged particles), and energy is therefore shifting here rather than in other lengths of wire making up the circuit.

Where energy is being shifted, and where it is not 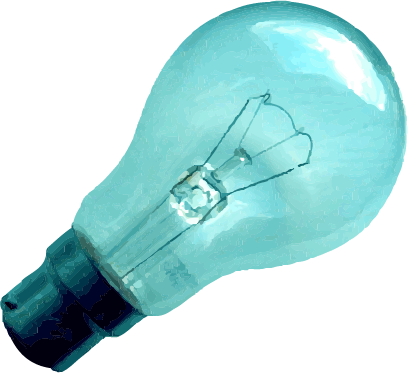 Once there is a steady current, the filament remains at the same temperature, and energy is shifting to the thermal store of the surroundings. We'd recommend starting by restricting discussions to the steady current, and adding the complexity of the transient process later, and then only if the conversation turns in that direction.

By way of contrast, the connecting wires for the circuit are usually made from relatively thick (i.e. large cross-sectional area) lengths of copper wire, which have a minimal resistance. The circuit components are designed so that most of the energy is shifted by the intended component (i.e. by the bulb and not by the connecting wires).

Remember: wherever there is an electric current in something which has resistance, energy is shifted.

The diagnostic questions can be used to check the pupils' understanding of series circuits.

The following question, relating to the effect of increasing the number of cells in a circuit, was set to a group of students...