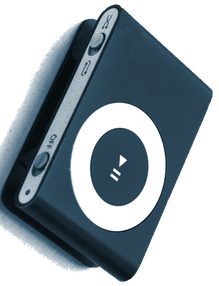 Here we provide more information for your interest.

Sound is often encoded in another form, before being decoded and converted back to vibrations in the air that we can hear. Producing these codes involves several steps to capture the vibrations of the air as a continuous record over time.

Long ago, the original wax recordings relied on ingenious mechanical devices to carve grooves into the surface of the record, with each vibration in the air corresponding to a curve cut in the wax. To play back the record you had to follow these curves at the same speed that they were cut, again with a clever mechanical device. This time the movement of the tracking object was amplified to make the air vibrate enough to enable hearing. Vinyl records are a mass produced version of the same coding and decoding process.

This whole process is reversed when we want to re-hear the sound: from the code to the electrical vibrations, then finally setting a loudspeaker vibrating to and fro, resulting in a sound from source (loudspeaker) to detector (us).

The way in which humans hear is rather complicated, and explaining it fully involves aspects of physiology, psychology and...

Few sounds consist of a pure tone of just one frequency. Here we show how different frequencies can be heard at once, at the...

Describing what you can hear

The range of sounds that humans are able to hear is impressively large, taking us from the loud roar of an aircraft as it...