A random process with fixed chance

How can radioactive decay be both random and based on fixed chance?

Wrong Track: How can it be possible for radioactive decay to be random and yet based on fixed chance at the same time? If the process is random you can't predict it and if it has a fixed chance you can!

Right Lines: If you imagine a stockpile of atoms making up a radioactive source, it is not possible to predict which atomic nucleus will disintegrate next but there is a fixed chance of disintegration, which applies to all of the atoms. 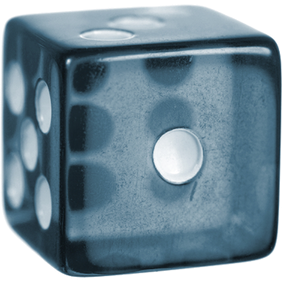 For some students the idea that the process of radioactive decay can be both a random process and one subject to fixed chance may seem strange.

Experience shows that it is really helpful to model radioactive decay by using a simple dice simulation. In one form of the activity, each student in the class is given 20 dice (radioactive atoms) and all students shake and roll their dice together. A six is taken to indicate the disintegration of an atom and each time a six appears that dice is removed. The remaining stockpile of radioactive dice, summed after each throw across all students, follows an exponential decay curve. This activity clearly models the random nature of the event (it's not possible to predict which dice will disintegrate next) along with the underlying fixed chance (one in six) of decay.

We'd suggest emphasising that it's a constant fraction that decay – here one-sixth. This constant-fractional-decay is the key idea.

Teaching and learning about ionising radiation

Teaching and learning about ionising radiation takes us into one of those physics contexts where the phenomenon being studied...

The energy of ionising radiations

Energy is measured in joule–except when it's not. For historical reasons there are a number of other measures of energy for...

Demonstration: this is a useful demonstration to introduce students to what they can expect to see in the diffusion cloud...