QTC – the discovery of a novel material

QTC is Quantum Tunnelling Composite, a remarkable new material discovered by David Lussey in 1997. Since then, the material has been carefully characterized (so that its composition and functioning are well understood), and its first applications have emerged.

QTC is a material made from particles of a metal (nickel) embedded in a polymer. Its resistance changes dramatically when it is compressed. Uncompressed, it is an almost perfect electrical insulator. When a force is applied, it conducts as well as a metal.

A QTC ‘pill’ is a small piece of the material, a few millimetres across and 1 mm thick. The graph shows how its resistance changes as a force is applied to it. 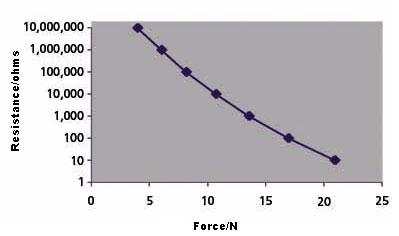 Questions: Over what range was the force on the pill varied? How many orders of magnitude are there on the resistance scale? By what factor did the resistance change?

Experiment: Look at some samples of QTC; measure the resistance of a QTC pill as you press on it.

Answer: A familiar example is temperature – the resistance of a pure metal increases by about one-third between 0°C and 10°C. This is tiny by comparison with the effect of pressure on QTC. A thermistor has a bigger change than this, over a narrow range of temperatures. (Other factors include magnetic field, light level (for LDR).)

Question: What might such a material be used for?

Answer: Pressure switches and sensors have many uses – more about this below.

How was QTC discovered?

QTC was discovered by David Lussey, working in Darlington (UK). At the time, he was trying to make a conductive adhesive for use in a security system. Computers would be attached by a wire to an alarm; the glue joining the wire to the computer would be conducting, so that if the wire was detached, the alarm would sound.

David Lussey describes himself and what he was trying to achieve:

I’m not a scientist but I am a practical person with a technical background from the military. When I needed a conductive adhesive and found there wasn’t one available, I decided to make one.

To make a conducting adhesive, David mixed metal powders with adhesives in different combinations. One turned out to be very special. When two metal plates were glued together, they did not conduct – the glue between them acted as an insulator. However, when he tried to pull the plates apart, they started to conduct.

This was very strange and not what I was looking for. So I put that on one side (in fact I threw it on one side!) and it wasn’t until some little while later that I thought, ‘Well, that was a strange reaction.’ I went back and measured it with a meter and found I got something very unusual.

It was not obvious at this stage that the material had commercial possibilities; nor did David understand how the material worked to produce this strange behaviour.

Question: How could David go on to investigate his material scientifically?

Question: Is this information needed to make practical use of the material?

Answer: Knowledge of the factors affecting resistance-pressure characteristics seems essential for practical applications. Details of underlying mechanism are not so vital, but insight into this might well suggest further developments.

David Lussey wanted to know how his material functioned. He approached a scientist:

First of all I needed a scientist to verify what I had found, and I found one in the shape of Prof David Bloor of Durham University. I took the first lump of this material that I had made to him and he did the specific tests that he needed to do and drew me some graphs. Those graphs actually formed part of the first patent that we put in on this.

As well as characterizing the properties of the material, Prof Bloor was able to explain its behaviour. The material’s properties come from the fact that the nickel particles, as seen under an electron microscope, are not smooth. Rather, their surfaces are covered in microscopic spikes. Pressure forces neighbouring particles closer together and a current of electrons can flow between spikes on neighbouring particles.

The process of electrons ‘jumping’ across a gap from one conducting material to another is known as quantum tunnelling. Hence the material’s name – Quantum Tunnelling Composite, or QTC. (Quantum tunnelling is also made use of in transistors.)

Question: Why did David Lussey need a scientist to help in his work?

Answer: A scientist would know how to establish the material’s characteristics in a standard way; he would also have access to the equipment needed to investigate its structure.

Experiment: Make a pressure sensor using QTC and calibrate it.

Within a few years I think you will see QTC in different forms perhaps but in many different uses. We can do so many things with it that some of these things are going to very quickly become commonplace. That’s a great drive in itself. That keeps me going, because what I want to see is everybody using it everywhere we can. It’s just the thrill of getting it to market, and making sure it does what it’s supposed to do, that keeps me going. That’s what drives me! 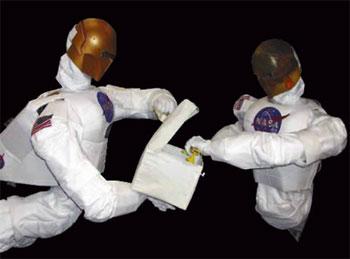 NASA is researching the use of QTC in developing tactile sensors for robotic hands as part of their ‘Robonaut’ project.

This page is based on QTC: A remarkable new material to control electricity published by the

Play-dough circuits for Christmas and all year r...

Although commercially available, it is cheaper to make your own dough. Why not get your class to build a circuit out of...

Absolute distinctions make the clear categorisation, but may store up difficulties for the future. If children happen to test...