Nuclear sources are required: electromagnetic stores outside the nucleus are insufficient

Both photons and particles can shift enough energy to atoms or molecules to ionise these targets. Although the mechanisms are different, the end result is the same and a significant quantity of energy must be shifted to a new store as the ionising radiation interacts with the atom in the absorber. To shift that much energy, the ionising radiation must come from a very energetic source.

That much is not new – it's a review of the radiations and how the irradiated absorbers are damaged, if enough energy is supplied. In this episode we'll be focusing on the sources of these ionising radiations. These sources turn out to be mostly nuclear, because of the quantities of energy that must be made available on emission.

Such sources, being nuclei, are embedded in atoms. The ionising radiation travels from the source atom and irradiates a different material. That process is the focus of this topic.

There is a completely different process where some of the atoms containing the unstable nuclei are themselves moved so that they are attached to a material. This is contamination, not irradiation.

The focus here will be on the nuclear origins of terrestrial ionising radiations. 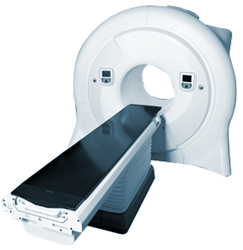 The concern here is with naturally occurring energetic photons and particles, originating in the nucleus. Understanding the man-made processes that generate the high-energy ionising radiations artificially requires more involved physics: there are also high-energy ionising radiations originating in the cosmos (cosmic rays), but the origins of many of these are speculated about, rather than known about.

Why are the sources of ionising radiations mostly nuclear?

High-energy photons can be produced in a number of other ways – such as medical X-rays. So far as the absorber is concerned, there may be no difference between inbound photons, depending on their source (these are characterised only by their frequency – photons carry no history about their origins with them).

Similarly there are now particle accelerators that can increase the energy in the kinetic store of charged particles to the same level as that from naturally occurring particulate ionising radiations. Again the artificial and the natural produce indistinguishable effects on absorbers and therefore detectors cannot be built that distinguish between them.

What did they learn about the topic of radioacti...

The following questions were given to 144 school students aged 15–16 years and drawn from four schools. The students had all...

First models of the atom

As students start experiments on ionisation, they will have a fairly basic model of atoms and molecules as portrayed by the...

Demonstration: this demonstration focuses on the properties of alpha particles. It follows on closely from the experiment...