Emission and detection in discrete chunks

Lighting and other electromagnetic radiating are emitted and absorbed in discrete chunks. Describing lighting as myriad individual photons streaming from an emitter and streaming to a detector makes many properties of light beam rather easy to explain.

The power in the heating by radiation pathway is a good starting point. The power is set by the number of individuals per second multiplied by the energy shifted by each individual, which is easy to picture and to model.

As photons get absorbed, so the intensity of the beam drops, and the power in the pathway decreases.

If the beam spreads out, then there are fewer photons in each cross-sectional area of the beam and the intensity of the beam again decreases.

Colours are simply due to the frequency of the photons absorbed. 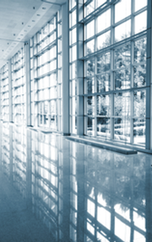 Beams can alter direction, by reflection and refraction. Reflection caused Newton, who developed and defended a particle theory of light, all kinds of difficulty. He could not really provide a convincing account of partial reflection, where some of the beam goes on, and some is reflected. As with monochromatic photons, all of his particles were identical, yet some had to pass on and some had to be reflected. There was no reason why some of the identical particles would be reflected and some transmitted. We have been a little circumspect up until now as we've always stated what will happen to each individual photon as a probability. It turns out that this is just right, and that the universe, much to Einstein's disgust, does function probabilistically at these very small scales. The average behaviour over the many, many photons in the stream correctly predicts what the beam will do, so long as we can correctly calculate the probabilities.

These calculations can even explain why the angle of incidence is equal to the angle of reflection and what the angle of refraction will be when the beam changes medium. In episode 03 we'll show you the first steps in doing these calculations. Further steps are more appropriate to post-16 studies and even to post-physics degree studies, so we'll tread carefully. The important thing to realise is that here we have an honest starting point.

Coloured lighting can be a beam of monochromatic photons: identical individuals of the same energy and frequency. This is an example of a spectral colour. Change the individuals making up the beam and the colour changes.

Coloured lighting can appear identical to the first case but also be a mixture of photons, each of a single frequency, but with many frequencies present in the beam. This is then an account of perceptual colour.

The matching between the photons and some processes in materials explains selective absorption, on which much of our knowledge about the world seems to depend, since we infer so much from the frequency and number of photons arriving. Again, much more depth is possible in these explanations, but we are off on the right lines and one model is shown to have wide applicability.

Things you'll need to decide on as you plan: pho...

- build connections between the macroscopic and the sub-microscopic - develop a model of photons that is based on a wide range...

Starting points on the nature of light

In episode 01, Radiating from source to absorber , a description was developed of light and sound as originating in vibrations...

In this activity you can introduce students to the idea that energy can be shifted in small chunks. This is particularly...