Energy generating companies need to predict the load on their network to ensure that demand can be met. A commonly plotted graph is that of the net load on the network against the time of day which displays the difference between the demand and the supply from renewable energy sources. A graph was developed by the California Independent System Operator to show the power demands that would remain after the power supplied from solar power had been removed. When the graph was plotted it was noted that the curve resembles a duck. 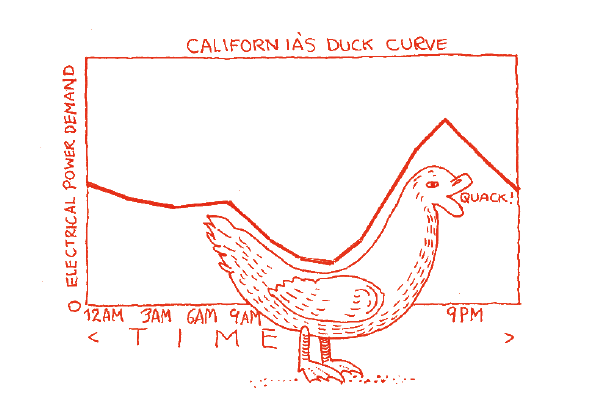 In many contexts, after sunrise, demand for power falls just as the power output of photovoltaic systems rises creating the concave back of the duck. Peak demand for power occurs just after sunset when no solar power is being generated, creating the peak that forms the head of the duck. The duck curve highlights the importance of power storage technologies such as batteries and pump storage, to ensure grids with a high percentage of photovoltaic power generation can meet consumer demand.

Crystal models made of marbles

Class practical: Students pile marbles into a cardboard tray and so find a convenient way of packing them together.

That hot water freezes quicker than cool water had been noted by many observers including Aristotle, Bacon and Descartes...

Pathways through the topic Energy