In the last two blogs, I have introduced the idea of ‘stores’ and, in the previous post, suggested that referring to eight stores will be helpful in discussions at Key Stage 3.

This post introduces the idea of pathways – the link between the physical processes and an energy analysis.

(Not too hard) work

Let’s try the three step approach on a clockwork motor lifting some masses. 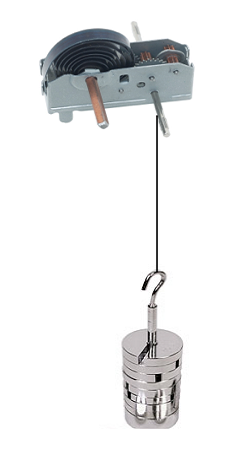 We will choose a start point after the spring has been wound and an end point when the masses come to rest at the top.

Start point: there is an elastic store associated with the wound spring;

End point: there is a gravitational store associated with the masses. This store has filled as the elastic store has emptied. Some thermal stores have also filled a little. 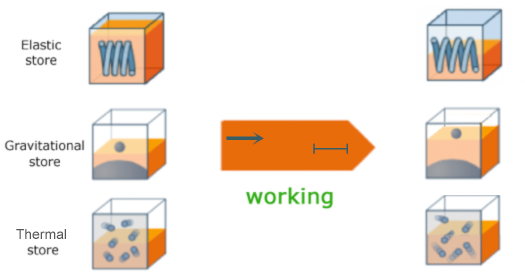 The changes have come about through the spring doing work or working. To be more precise, we might call it ‘mechanical working’.

Now let’s get an electric circuit to do the same job. 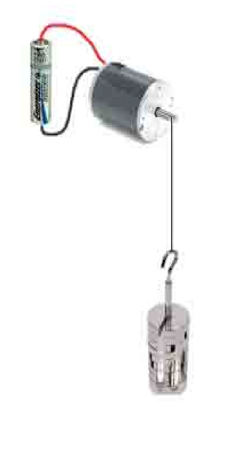 What is working now?

In this case, the working was done electrically by the cell and the circuit. So, it seems reasonable to say that the circuit was working electrically, i.e. this is a special case of working. 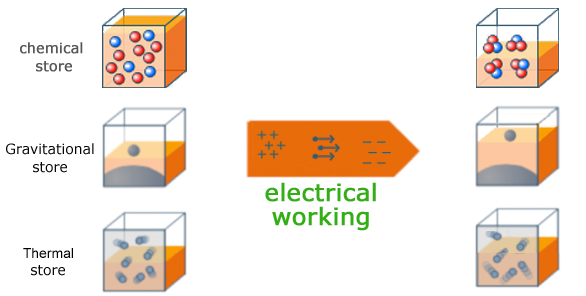 Let’s explore some of those points in more detail because I know some people feel uncomfortable that there is no electrical store – or equivalent of ‘electrical energy’ – in this analysis.

What happened to ‘electrical energy’?

I suggest that the usual analysis using the 9 types paradigm would have been something like:

We are so used to this that many people are tempted to invent an ‘electrical store’ to use in the new analysis. However, although it is a difficult idea to drop, there are very good reasons why we don’t need such a term – and why the term ‘electrical energy’ is misleading in this context. They are:

So, to summarise and emphasise, the charges are not storing or carrying electrical energy. Instead, they are enabling the circuit to do work (electrically) thanks to the fact that they form a continuous loop.

This analysis is consistent with our model of a continuous loop of moving charges in an operating electric circuit. It is also consistent with SPT’s rope-loop illustration of this model.

Heating as a pathway

To complete our toolkit, we need to introduce the idea of heating as a pathway. I’ll do this very briefly here and return to the idea in a subsequent post.

Heating is a well-defined idea in thermodynamics: it is the transfer of energy from an object at a higher temperature to one at a lower temperature. It is clearly helpful if we can use the term in a similar way at school level.

There are two mechanisms for enabling a hot object to heat a cooler one:

A cup of tea will heat its cooler surroundings by both conduction and radiation.

So, jumping straight to the energy analysis (for brevity)...

Start: there is thermal store associated with the tea

We have discussed four pathways:

These will cover our needs and are discussed further in the SPT resources. Here are some points to note:

In summary – a complete toolkit (almost)

We now have a complete toolkit for discussing energy at Key Stage 3 – although I have skirted over some aspects here. It comprises:

Note that this toolkit is not a model or a set of laws of physics – although it is consistent with some important physical laws and models – including some that we use at school.

It is recorded that both Philo of Byzantium and Hero of Alexandria carried out experiments using thermoscopes, tubes filled...

During a marathon, a typical runner transfers around 100 J during each foot strike with the ground, of which around 35 J is...

An important factor in the failure of Robert Falcon Scott’s expedition to the South Pole was an error in estimating the energy...

Many students attribute macroscopic properties like hot and cold, melting, or expanding to particles (or to atoms, molecules) when using a particulate model to explain thermal phenomena