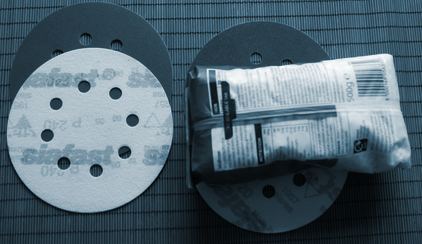 To help children describe the world by:

Invite children to drag the matched pieces of sandpaper over each other, and label them with the three slip forces. Encourage the children to relate their labelling to the roughness of the surfaces, ascertained by rubbing their finger over the sandpaper and perhaps inspection of the surface by using a magnifying glass. You could profitably relate this to the roughness of the finger puppets. It's important to make links to the warming effect of the slip force, and this is something that can be felt rather well when you drag the grip or slip puppet over most surfaces.

Now repeat with the grip arrows. Here the trick is to order the sandpaper pairs by which are best at preventing relative movement. You can relate this to many examples where we do not want things to slide past each other: getting cars going – its best if the tire does not slip on the road. similarly for walking: you don't want the sole of the shoe to slide over the pavement.And for lifting tins, you don't want movement between the surface of the tin, and your hand.

We'd suggest not using more than three matched pairs of sandpaper surfaces, and not mixing and matching the surfaces, as this makes the labeling harder to do. However children could be allowed to explore by themselves, but may have to invent their own labelling arrows. They might find it hard to discriminate reliably, but so long as they are reasoning about the surfaces, and are moderate in their expectations, such explorations are likely to be worthwhile.

Demonstration: The higher the viscosity of a liquid the more it resists motion of a body through it. The result can be very...

The air rushes out of the balloon and through the cap, lifting the CD up on a cushion of air. The air reduces the friction...

Here pupils make some measurements of frictional force, and investigate the factors affecting that force.

Some pupils confuse friction and normal reaction, as both arise from an interaction between an object the surface it is sitting on

Some pupils think that friction arises only when there is motion

is a special case of Force
2021 IOP Awards