Georg Ohm’s father was a locksmith, a background that may have given his son practical experience that was useful to his future electrical research. While pragmatically useful, Georg’s relationship with his father was uneasy: when his father discovered that the young man spent his time at the University of Erlangen dancing, ice-skating and playing billiards, rather than studying, he forced his son to leave his studies.

In 1806, the young Ohm was sent to Switzerland, where he worked as a private mathematics tutor, before returning to university. After graduating with a doctorate, he became a lecturer but couldn’t live on the meagre salary and took up school science and mathematics teaching at a challenging school in Bamberg. Ohm’s experiences in the classroom inspired him to write a geometry textbook which was praised by the King of Prussia, who offered him a role in a better school, giving the scientist more time for his research. This school had excellent practical equipment and Ohm began to investigate the contemporary received opinion that current and potential difference were independent.

He carried out experiments on the deflection of a magnetised needle produced by different lengths of copper wire. He argued that his observations could be modelled through the relationship:

where X designated the deflection of the needle, x the length of copper wire and a and b were constants.

In the same year, he published another paper in which he summarised the results of his experiments in the form S=A/L where S represented the strength of current, A the sum of all the tensions and L the ‘Reduzirten Lange’ or the resistance.

Cavendish pre-empted Ohm’s statement of his eponymous law by some 70 years but his work remained unpublished and was only later rediscovered by Maxwell. Some philosophers of science categorise Ohm’s law as a ceteris paribus law, rather than a true scientific law, as it is dependent on a condition (constant temperature) rather than being universally true. 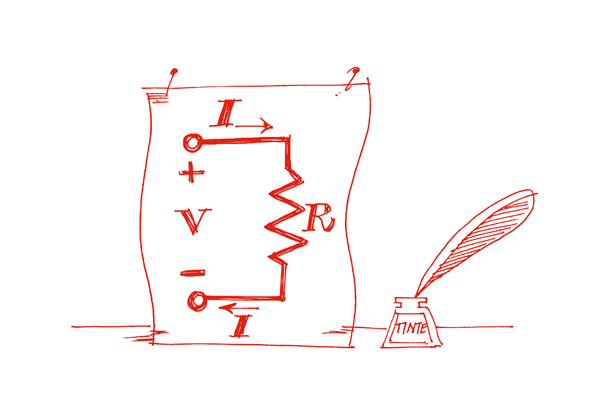 Ohm’s work did not meet with approval at the time of publication. One critic described his research as:

…a web of naked fancies, which can never find the semblance of support from even the most superficial observation of facts: (and) he who looks on the world with the eye of reverence must turn aside from this... as the result of an incurable delusion, whose sole effort is to detract from the dignity of nature.

As Ohm was a schoolteacher, word of his publication reached the minister of education who proclaimed, “A professor who preached such heresies was unworthy to teach science.” This hostile reception led to Ohm resigning his teaching post. He spent many years seeking a university position, living in poverty while moving between poorly paid teaching jobs.

One of the reasons Ohm’s work was not more readily accepted was because he used contemporary electrical terms that had ambiguous meanings. For example, he did not clearly distinguish between force and electrical potential, and confusingly drew on ideas from Fourier’s theory of heat – he refers to the ‘diffusion’ of electricity. The intervention of Kirchhoff, who related Ohm’s concept of ‘electroscopic force’ with electrical potential, allowed Ohm’s law to be integrated with existing electrical theory.

In the final two years of his life, Ohm’s fortunes reversed and he was appointed the professor of physics at the University of Munich. In addition to his electrical law, Ohm proposed an acoustic law which proposes that musical notes may be decomposed into a number of pure tones.

W. Berkson, Fields of Force: The Development of a World View from Faraday to Einstein, London, Routledge, 1974, p. 131

Heating effect of a current

Demonstration: model a fuse using fine strands of steel wool. Too large a current causes the steel fibres to heat and melt...

In the late 19th century, arc lights were a common form of lighting. The devices produce light from a spark (or electric arc)...