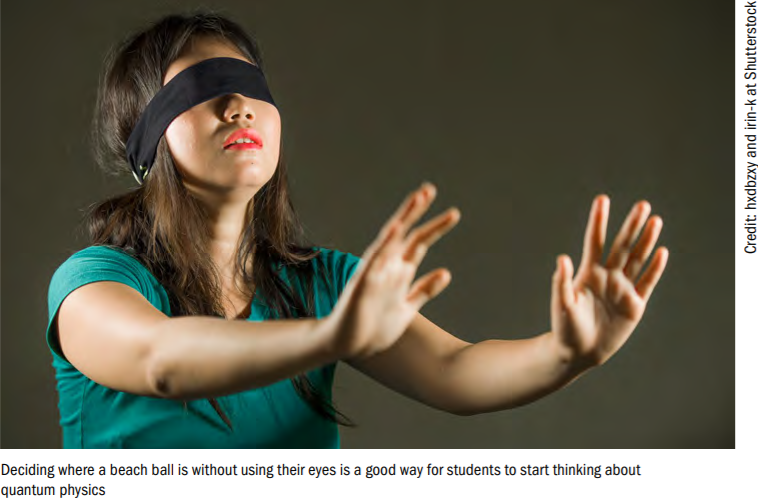 The extent to which quantum physics can be meaningfully taught at secondary level can be a point of contention. Views can range from “don’t, it’s just too hard and weird, they’ll get confused” to “we HAVE to, it’s what modern physics is about”. Like most debates in education there is not a clear answer but research from a team in Norway suggests that how we interpret the everyday concept of observation may be a good starting point.

The ReleQuant project has developed digital, research-based learning resources in general relativity and quantum physics for upper secondary physics. Although based in Norway, the resources and some of the messages from the associated research, are of use and value to secondary teachers elsewhere.

Based on research with students using the ReleQuant resources across seven schools, Anders Huseby and Berit Bungum noted that challenges can arise if students do not discriminate clearly between passive looking, observation and measurement. The authors found that some students did not appreciate that to measure, you will also need to interact with the thing you are measuring. Many students interpret observation as if it were the same as passive looking where there is no interaction at all between the looker and the object being looked at. While this may be correct when it comes to vision, this made it harder for them to realise that the measurement process interacts with the system it is measuring. This finding suggests that reinforcement of a precise use of the term ‘measurement’ with an emphasis that the process requires an interaction, is important. As in many physics teaching situations, an insistence on the precise use of concepts is not pedantry, but conveys important meanings needed to support understanding.

The team developed a teaching approach to help students realise that measurement is connected to interaction: students were asked to decide where a big beach ball was in a room with their eyes closed. In order to find the ball, they have to stretch out their arms and legs. In doing so, as they measured, they interacted with the ball, almost certainly moving it from the position where it originally was. The researchers found that students understood this point quickly, making it easier to accept that we cannot just look at electrons since light will have to be reflected from them.

Studying quantum physics at secondary level may always present some challenges, but paying close attention to language and how everyday concepts may be incorrectly interpreted can help. Attention to language, and using research-informed resources such as those produced by ReleQuant, can make the wonders and beauty of quantum physics accessible to more students and open a deeper, richer understanding of the world.

The Huseby and Bungum paper, Observation in quantum physics: challenges for upper secondary physics students in discussing electrons as waves, is at

The ReleQuant resources, further details of the project and links to more research are at