Moving a wire through a magnetic field: lighting!

A demonstration that's near magical.

This is an interactive teacher demonstration that can be used to introduce students to the idea of inducing an electrical potential difference by moving a wire through a magnetic field.

This demonstration might be used to introduce students to the essential ideas of electromagnetic induction. The physics explanation involves a new way of thinking and talking for the students (with conductors cutting magnetic lines of force), so care needs to be taken in presenting these ideas. In addition, don't spare your efforts in emphasising the vast importance of this apparently simple effect: this is the basis of all of our electrical supply throughout the world.

The demonstration can be carried out in a series of steps, starting with a way of setting the scene to capture students' interest and imagination.

In setting the scene ask the students to imagine themselves living on a remote island where they need an electrical supply for the basic comforts of life (e.g. lighting and cooking).

Teacher: So where would you get your electricity from?

Teacher: Oh no! There are no plugs on this island… no electricity supply!

Anya: You could use batteries.

The solution seems hopeless until you offer an alternative…

Building an understanding through demonstration 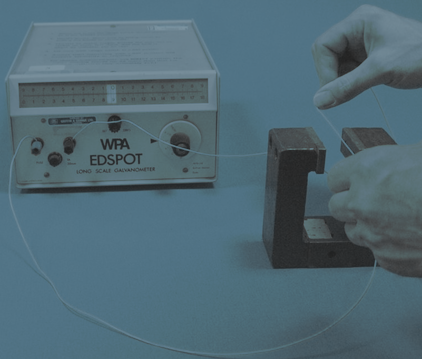 Teacher: Well, I can actually make an electrical supply if I have just a magnet and a piece of wire, both of which are available on the island.

It may seem unlikely to the students that you will be able to generate an electric current armed only with a magnet and a piece of wire.

Now introduce the wire and magnet solution, first sitting the students around the demonstration bench. Explain that the light beam galvanometer is simply a very sensitive ammeter capable of measuring small currents. The magnet is very strong. You may wish to ask one of the students to remove the iron keepers for you (which will be a struggle, so choose wisely).

Now, with the galvanometer pre-set on a suitably sensitive range, move the wire down through the jaws of the magnet: the spot moves! Triumph!

What kind of movement is needed to generate an electric current?

First make it clear that:

Teacher: If the conducting wire is moved in such a way that it cuts the magnetic field lines running between the poles of the magnet, then a potential difference is induced that drives a small current round the circuit.

The process by which a potential difference is generated across the ends of a conductor when it's moved through a magnetic field is called electromagnetic induction.

We'd hope that the students will be impressed by this generation of an electric current, but it will be clear that such a small current is hardly going to be your saviour on the small island. The obvious question is:

Teacher: How can we get a bigger electric current by induction?

It's easy to demonstrate the second two.

The demonstrations lead to other demonstrations with bicycle dynamos and similar commercial electrical generators. All of these involve moving wires past magnets or vice versa.

Energy descriptions are best offered in relation to a simple bicycle dynamo where it's clear that the quicker you turn the handle, the brighter is the bulb.

Physical: I turn the handle and the bulb lights.

Energy (stores): energy is shifted from the chemical store associated with my body to the thermal stores of the bulb filament and of the surroundings.

The motor as a dynamo

Class practical: this simple experiment shows the reversibility of motor and dynamo effects.

Demonstration: An intriguing demonstration in which a lamp grows brighter and brighter with more turns on the secondary coil...

Demonstration: showing how the brightness of a lamp increases when a dynamo powering it turns faster.