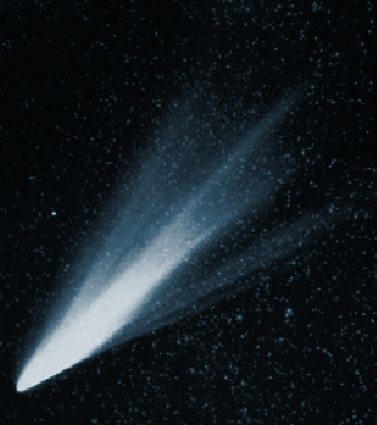 Comets appear to be relics from the formation of the solar system. Unlike the planets, they are on highly elliptical orbits around the Sun. That means they come very close to the Sun for a short period of time, typically a month or two, and then spend much longer at a vast distance from the Sun. Halley's comet, for example, returns every 76 years.

Comets consist of a solid nucleus surrounded by a mass of frozen ice and gases. As the comet approaches the Sun, the outer layers warm up, producing a stream of vapour particles. These are swept away from the Sun to form a tail by the solar wind of particles coming from the Sun. The tail is long but not very substantial and shines as a result of reflected sunlight.

In 1950 Jan Oort noticed that no comet had been observed with an orbit indicating that it came from interstellar space and that most of the orbits went way beyond Pluto. He therefore proposed that comets reside in a vast cloud at the outer reaches of the solar system and this has come to be known as the Oort Cloud. The statistics imply that it may contain as many as a trillion comets. Unfortunately, since the individual comets are so small and at such large distances, we have no direct evidence about the existence of the Oort Cloud.

The Kuiper Belt is a disk-shaped region beyond the orbit of Neptune containing many small icy bodies. It is now considered to be the source of short-period comets. Occasionally the orbit of a Kuiper Belt object will be disturbed by interactions with the giant planets in such a way as to cause the object to cross the orbit of Neptune. It may then have a close encounter with Neptune sending it out of the solar system, or into an orbit crossing those of the other giant planets, or even into the inner solar system. 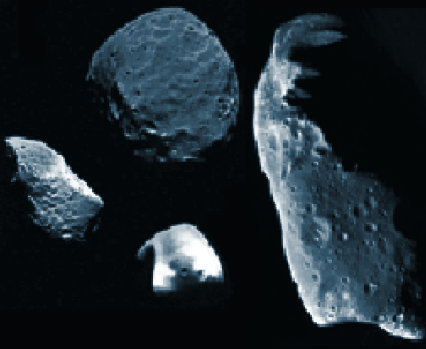 On the first day of January 1801, Giuseppe Piazzi discovered an object that he first thought was a new comet. However, after its orbit was better determined it was clear that it was not a comet but more like a small planet. Piazzi named it Ceres, after the Sicilian goddess of grain. Three other small bodies were discovered in the next few years (Pallas, Vesta, and Juno) and by the end of the 19th century several hundred had been identified.

In total, several hundred thousand asteroids have been discovered and given provisional designations so far, with thousands more being discovered each year. There are undoubtedly hundreds of thousands more that are too small to be seen from the Earth. There are 26 known asteroids larger than 200 km in diameter.

The census of the largest ones is now reasonably complete and probably 99 % of the asteroids larger than 100 km in diameter are known. Of those in the 10–100 kilometre range, about half have been catalogued. Very few of the smaller ones have been identified and there are probably considerably more than a million asteroids in the 1 km range. Asteroids are generally assumed to be fragments of larger bodies (such as planets) and although they are large in number, their total mass is less than that of the Moon.

Between the orbits of Mars and Jupiter there is a band of rocks in orbit around the Sun that is the main band of asteroids. There is also a body of near-Earth asteroids, which tend to be on more elliptical orbits than the planets. The result is that some of these occasionally come close to the Earth (within a million kilometres), the equivalent of an astronomical near miss. If one collided with the Earth, the results would be catastrophic. 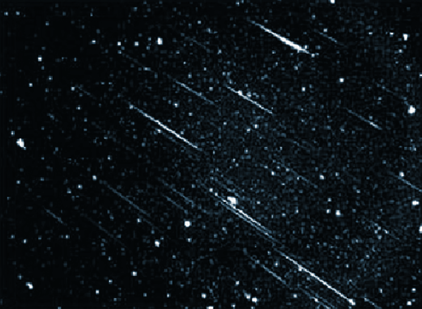 Meteors are small lumps of rock or grains of dust travelling around the Sun. The Earth goes through streams of these at particular times of the year. When it does, the grains burn up in the Earth's atmosphere as they may be moving very fast relative to the Earth. The burning material appears as a glowing object in the sky – what we commonly call a shooting star. It is worth noting that approximately 40 to 50 tons of meteorite material falls to the Earth each day.

A meteorite is a meteor that reaches the surface of the Earth without completely burning up. Most of them consist of material left over from the formation of the solar system. Large meteorites can do considerable damage as they are moving very fast and have a lot of energy associated with them.

A child spending between 10 and 15 minutes in a school playground is likely to have two or three meteoritic dust grains fall on their head!

The collision of a meteorite with the Earth in the Gulf of Mexico, 65 million years ago, is one possible cause for the demise of the dinosaurs.

The solar system and beyond - Physics narrative

Selecting and developing activities for lighting...

Suggestions for activities to aid the teaching of 'lighting the Earth' based on the Physics Narrative and the Teaching...

Thinking about actions to take: The Solar System...

A concept map for Earth and space

You might use a concept map for both formative and summative assessment purposes. At the start of the lessons on Earth and...

Some students assume the Earth, Sun and Moon are approximately the same size