Power in a pathway is measured in watts: visible power in lumens 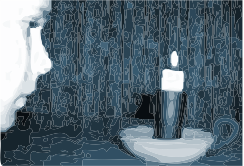 The power in the heating by radiation pathway is measured in watts. That's simple and is often called the radiant power. More complex is to think about the flow or flux through a particular area – the number of watts per square metre. This is called the radiant flux.

However, neither of these takes into account the sensitivity of the eye to different frequencies, so they cannot really be measures of brightness. Both the radiant power and the radiant flux could be very high, and yet you could see nothing, because all of the frequencies fall outside the visible range. The energy shifted by the photons in the beam do not match the energy required to trigger the processes in your eye that allow you to see.

There are a range of measures (used in photometry) that are tuned to the standard eye that you may come across. This is a complex area, and a salient selection are dealt with here.

The power of the light detected by the human eye is a good place to start, and is the analogue of the radiant power, adjusted for the human eye. It is measured in lumens. On purchasing a light bulb, you'd be well advised to go for the highest number of lumens per watt you can find, and so maximise the ratio of visible photons: invisible photons. Or, as covered in the SPT: Energy and electricity topic, most of the power will be in the lighting pathway and only a little in the heating pathway.

The lux is a unit that measures detectable brightness

The lumen does not tell you about the brightness, because brightness is about the detectable photon stream per unit area, and there is a photometric equivalent of the radiant flux (wattmetre2) or 1 W m-2) to perform this function. This is the lux. One lux is 1 lumen metre-2. You are perhaps most likely to come across it in specifications for the sensitivity of electronic imaging devices (such as video cameras).

Lumens are the modern equivalent of candlepower

There is one more step of interest here. Just as power is of most interest to humans in practical situations (remember the unit horsepower, to show how many horses a new-fangled steam engine could replace), so lighting is of most interest when we put it to work. The candlepower performed the same function as the horsepower for many years as the unit of light intensity. Take one standard candle – of fixed size and constituents – and compare its output with the source that needs calibrating. The luminous intensity of a source depends on the power emitted in a particular direction, as we're usually interested in lighting something, not just lighting.

The modern unit is the candela. If a source is of 1 candela, uniformly in all directions, then it emits a luminous power of 4PI lumens. The candela is now one of six SI base units, to which all others are related, so you have burrowed down to the operationally defined bedrock on which the whole system of units is constructed. That seems a good place to stop – before things get too complicated.

These are the base units:

Candles have not quite been banished – astronomers still refer to standard candles. These are objects of known brightness. From this and the intensity detected on Earth they can work out how far away these objects are, following the candela–lumens–lux route.

Let's think about making a pot of tea. Boiling enough water for a pot of tea takes 180 second with my kettle. The kettle is...

Class practical: Students measure their personal power by running up a flight of stairs.

Comparing the powers of electric motors 1