Martinus van Marum, a Dutch physician, developed an interest in the physical sciences and was appointed director and curator of the cabinet of curiosities of the Dutch Society of Science. Van Marum gave public demonstrations of chemical and electrical phenomena and, in the 1780s, had a large static generator built which can be seen today in the Teylers Museum in Haarlem.

The machine consists of two glass discs, 1.5 m in diameter, that can generate a potential of 300-500 kV and produce sparks over distances of 7 m. The effects of the machine on different objects were impressive: a 10 cm by 10 cm piece of box-wood was “rent in pieces”, metal objects were melted and “dispersed in all directions” and a piece of tin was vaporised.

Van Marum developed other demonstrations of static electrical effects, including artificial clouds formed of two bladders filled with hydrogen gas and given opposite charges. The bladders gradually rose to the ceiling, were attracted to each other, and, when they were close enough, a spark jumped between them causing an explosion. To make the demonstration more like a storm, Van Marum added a third balloon, filled with a mixture of hydrogen and air, between the two balloons. This exploded with a loud bang when the artificial lightning was triggered. 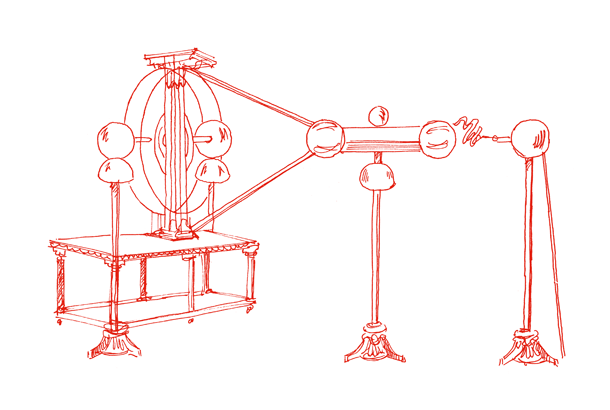 Demonstration: An illustration of a collision with invisible forces.

Otto von Guericke developed a demonstration to make his case that the attractive force of the Earth was not gravitational in...