Magnetic Resonance Imaging (MRI) uses a magnet, strong enough to pick up a car, to produce detailed images of your internal organs.

Doctors can use MRI to see which parts of the brain are active when you perform certain tasks or feel certain emotions and sensations.

A large proportion of the human body is made up of fat and water, both of which contain lots of hydrogen atoms. In fact, you are made up of approximately 60% hydrogen atoms. Magnetic Resonance Imaging (MRI) works by measuring the way that these hydrogen atoms absorb and then give off electromagnetic energy.

When you have an MRI scan, you lie inside a machine that contains a powerful magnet. The nucleus of a hydrogen atom is like a tiny magnet so, by lying in line with the strong magnetic field inside the scanner, all your hydrogen nuclei line up too – just like a compass needle lining itself up with the Earth’s magnetic field.

The scanner also has several electric coils which create variations in the strength of the magnetic field at different points in your body. This means that each hydrogen nucleus experiences a slightly different magnetic field strength, which is important for detecting where exactly they are.

A pulse of radio waves is used which gives enough energy to the hydrogen nuclei for them to change direction. When the pulse is switched off the nuclei revert back to their original position and each nucleus gives off energy in the form of a radio wave. The frequency of these waves depends on the strength of the magnetic field where each nucleus is and this means that the scanner can work out the location of each nucleus.

The radio waves given off also allow the scanner to work out what type of body tissue the hydrogen nuclei are part of. This information is used to create a map of the different types of tissue in your body.

Functional Magnetic Resonance Imaging (fMRI) is a type of MRI that allows you to see which parts of your brain are active when you perform different tasks or feel certain emotions and sensations.

Brain activity requires energy and a good supply of oxygen-rich blood. The scanner can see the increase in blood flow to the most active parts of the brain because it can detect the difference between hydrogen nuclei in oxygenated blood and those in de-oxygenated blood. In this way the scanner builds-up a 3D map of which parts of the brain are working particularly hard.

fMRI mapping of the brain is used to find out how the brain carries out mental tasks and what parts of the brain are responsible for different brain disorders.

You can use MRI scans to see what parts of the brain are active when your subject is doing various different things. Here are examples showing five different stimuli. 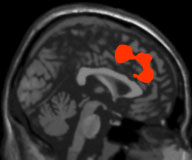 MRI scan image highlighting the areas of the brain involved in feeling pain.

The scan shows the regions of the brain that became more active when the subject's hand was heated to a painful level. Pain involves both sensation and emotion so different types of pain result in different areas of the brain being active.

Using fMRI scientists can start to understand how pain works, and how it might be possible to reduce painful experiences. 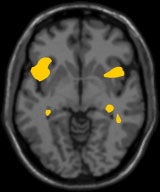 MRI scan images highlighting the areas of the brain involved in feeling love. 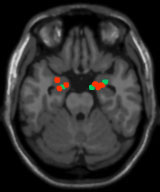 MRI scan images highlighting the areas of the brain involved when feeling afraid.

The scans show that when your subject is frightened, a brain structure called the amygdala becomes more active.

The amygdala is responsible for generating a range of negative emotions such as sadness, anger and disgust. It becomes less active when people perform non-emotional tasks, which is why keeping yourself busy when you're sad can make you feel better. 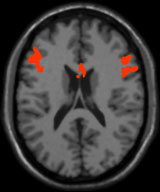 MRI scan image highlighting the areas of the brain involved when feeling joyful.

Your scan shows the regions of your subject's brain that become more active when he watches his football team score a goal.

Although some of these areas are related to the feeling of joy, some may be a result of different influences, such as the anticipation of a goal being scored. Deciding what the subject should do or see to isolate an emotion is perhaps the hardest part of fMRI studies. 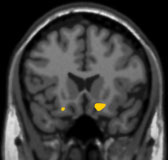 MRI scan images highlighting the areas of the brain activated by smell.

The scan shows the brain areas that are activated by smell. Smell is a complex sense and several different parts of the brain are needed to work out what a smell is, where it's coming from and whether you like it or not.

Inside Story: Physics in medicine

Inside Story was produced by the Institute of Physics and the Medical Research...

Having established the existence of the nucleus, you can now consider experimental evidence for its size, starting from the...