Rutherford himself used this model in explanations and lectures with obvious delight.

The light rod should be about 1 metre long, either wood or aluminium tube, and about 1 cm in diameter.

The cylindrical magnets should be 3 cm long and 1 cm in diameter. They should be fairly light but strong enough to be repelled from the stationary magnet.

The ideal (but impossible arrangement) would be a very long pendulum with its bob consisting of an isolated north pole so that it swings just above a stationary isolated north pole. Although this is impossible in a real model, it is important to make each magnet long so that its south pole is less important and less strong. The following paragraph explains why for the brave.

The inverse-square repulsion between the two north poles would make the bob follow a hyperbolic path, except for the effect of gravity on the bob. With a very long pendulum, the restoring force due to gravity might be so small compared with the magnetic repulsion that the orbit closely matched the alpha particle’s hyperbola. However, with real magnets there is always a pair of poles. If the magnets are short, the repulsive force between the pendulum magnet and the fixed magnet will be nearer to inverse-fourth power force. The restoring force due to gravity, which increases with displacement, will dominate the motion, except at very small approaches.

It is probably best to start with a collision which is almost head-on, with smaller deflections, before continuing with wider and wider collisions. To minimize gravity effects, limit the pendulum to fairly small amplitudes, but start it with a push. By doing this, the initial and final parts of the path will look almost straight, with the bend showing only during close approach, as with alpha particles. 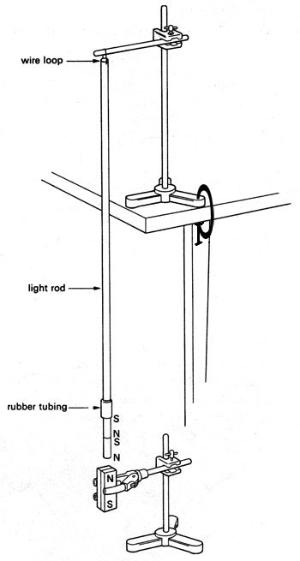 Carrying out the demonstration...

Model of the atom

At the beginning of the twentieth century, there were still some sceptics who were...

Demonstration: This is another model for the scattering of alpha particles; this time using the electrostatic repulsion...

Demonstration: Rutherford’s scattering experiment was an ingenious piece of design and interpretation. Whilst it is not...

Demonstration: visible diffraction rings on a screen show the wave behaviour of electrons.

Many students hold a range of atom models, including hybrid models consisting of combinations of different models and incorrect ideas