Robert Norman was a scientific instrument-maker, working in London in the 1560s-80s. Among other devices, he made compasses which were sold for use on ocean-going ships.

To make a compass, Norman started with an iron needle. He checked that it balanced perfectly on its support, and then he magnetized it using a lodestone. Each time he did this (and he did it hundreds of times), he noticed that the magnetized needle pointed correctly to the north, but that its north-seeking pole also tilted downwards slightly. He added a small weight to the other end, to counter-balance this annoying feature.

His explanation of the tilt of the needle was that he was somehow lacking in skill, or that the material he was using was imperfect.

He tried an alternative to the counterweight: he cut a small amount off the other end of the needle. However, it still tilted downwards. What was going on?

Norman set about investigating the effect properly. He suspended a needle so that it could rotate in a vertical plane. Then he magnetized it, and set it up pointing north-south. It pointed towards the north, but it also tilted downwards! This convinced Norman that the effect was real.

Experiment: Show a magnet, hung by threads. It turns to point north, but there is no obvious sign of tilt. The support prevents it from tilting. Now show a Magnaprobe, which is a small bar magnet mounted in a gimbal so that it is free to rotate in three dimensions. The magnet is clearly tilted, showing that the Earth’s field has a component downwards into the Earth. (Norman called the tilt inclination; now it is known as declination.) 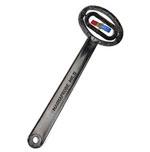 Natural phenomena are often far from obvious. Intelligent people can work for a long time before they realize an important feature of their area of work.

Question: Look at a diagram of the magnetic field of the Earth. How would the tilt of a compass needle vary in the opposite hemisphere? And at the equator?

Answer: The opposite way in the opposite hemisphere (lines of force out of the ground in the S hemisphere); horizontal at the equator. Robert Norman might have got further with his ideas if he had asked sailors to repeat his work in different places.

Norman tried another experiment. He mounted his needle on a cork, and added weights so that the whole thing had the same density as water (it had neutral buoyancy). He then submerged it in water, thus cancelling out the effect of gravity. Unmagnetized, the needle showed no effect; when magnetized, it pointed north and tilted downwards. This amazed Norman. He had expected that the needle would be pulled downwards to the bottom of the water by whatever force caused the tilt. He declared that he could find no explanation for the tilt of the magnetized needle.

William Gilbert and the magnetic Earth

By 1600, scientists and navigators were aware of the deviation (variation) of the Earth’s magnetic field from true north, and of its declination to the horizontal. It was time to dismiss the ancient notion that a compass needle was attracted to the Pole Star.

Question: What is the Pole Star, and why is it important?

Answer: It is a star which appears to be directly above the Earth’s N pole, so that the Earth’s axis of rotation passes through it. Thus the Pole Star always appears in the same place in the sky, while the other stars appear to rotate about it. Useful for navigation (if you are in the northern hemisphere).

How attractive, that ancient idea! The needle of a compass allowed you to navigate, whether or not you could see the Pole Star, because its needle was attracted to the star. Hence the behaviour of a compass was explained in terms of older ideas, from the science of navigation. Scientific ideas often draw on older ideas; this may give the right answer, or it may lead you up a blind alley.

Question: Why might we reject this idea (that it is the Pole Star which attracts the compass) today, in the light of Norman’s findings, and other ideas?

Answer: A compass needle points downwards, into the Earth, not up into the sky; and it points to one side of true (geographical) north.

William Gilbert came to the conclusion that the Earth itself was magnetic. He made a model of the Earth, a terrella, from lodestone, and showed how a compass would behave at different points around it.

Gilbert made his terrella to promote his ideas through demonstrations. It also helped him to develop his ideas about the Earth’s magnetism. Many versions of the terrella were made and sold to the public; scientific experiments were becoming a popular pastime. Scientific instrument-makers needed such a market to keep their businesses going.

Experiment: Fix a bar magnet inside a ball, to represent the Earth. Move a Magnaprobe about it; look for the magnetic poles, where the field is at right angles to the surface.

Question: Gilbert made a prediction: he said that compasses would be of little use for finding directions close to the Earth’s poles. Why is this?

Answer: A compass needle is vertical at the poles, so you can’t tell which way is north or south.

A Magnaprobe has many uses in a study of magnetism. It can show the three-dimensional shape of the field around permanent magnets, and around electromagnet coils. Note that the Magnaprobe Mark I is more sensitive than the Mark II, and so is more suitable for investigating weak fields like the Earth’s.

We are grateful to David Sang, author of this Case Study.

A magnetic field exists in any region where a charged particle is subject to a force that depends only on the particle’s...

The field around a permanent magnet should be familiar to your students. In practice, where we want a controllable field, we...

Episode 413: The force on a moving charge

Here you can extend the idea of a magnetic force on a current to consider moving charges.