What does the loudness of sound depend on? 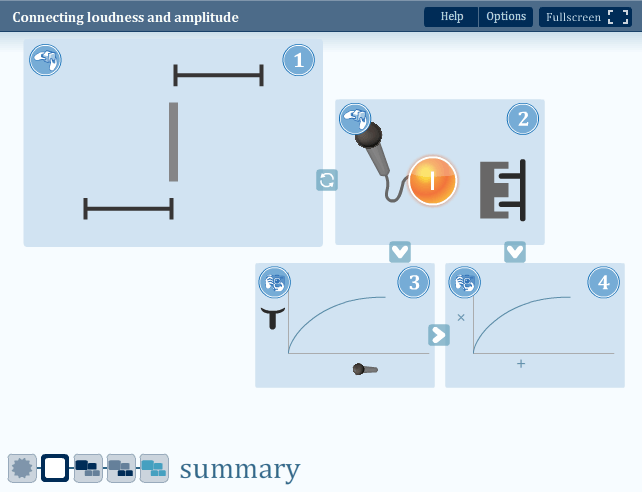 Sounds vary not only in terms of the pitch or frequency, but also in their relative loudness.

As you might expect, louder sounds are produced by larger vibrations of the source. If the loudspeaker cone moves backwards and forwards over a greater distance, a bigger disturbance is produced in the air and a louder sound results.

As with pitch, the loudness of a sound is a subjective measure – it depends on the person. You may have an elderly relative who listens to the TV at what seems to be ear-shattering volume to you, and yet is comfortable for their ears. The same sound is judged to be of different loudness by two people.

A more objective measurement of loudness is the amplitude of the vibration.

The human ear is sensitive to sounds over a huge range of loudness. For example, the loudest sound that the ear can safely detect without suffering any physical damage is more that one billion times more intense than the threshold of hearing (where sounds can just be heard).

The ear responds to sounds of different loudness in such a way that huge increases in amplitude are registered as small increases in loudness.

To match this way in which the ear responds, the relative loudness of sounds is usually measured in decibels.

The decibel scale, which is a logarithmic scale, stretches from 0 dB at the threshold of hearing to 140 dB at the threshold of pain (values vary, as this is subjective – pain is not a precisely defined experience). Each time you go up one decibel, the loudness of the sound increases by a constant factor and you can just about hear this change.

Logarithmic intensity scales are also used to report on the perceived brightness of light (the sensitivity of the eye is also logarithmic) and for measuring the strength of earthquakes (the Richter scale).

Some 'finding out' to reinforce ideas on sound.

Typically pupils are quite happy to say that sounds get quieter as they travel farther away from the source and suggest they...

Some students consider light as separate from seeing