A current in both loops

In each loop of the circuit, the charged particles are set into motion by the battery and are shifting energy to the surroundings as they pass through the filament. 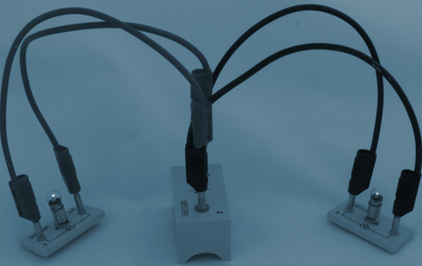 When a second bulb is added in parallel the electric current in each bulb is the same as the circuit with one battery and one bulb. As the loops are independent, each functions exactly as the single loop. The two bulbs are symmetrical, and so both bulbs are of equal brightness (and of the same brightness as one bulb in a single loop, precisely because that is what they are).

Connecting bulbs in parallel does not get you something for nothing, even though at first sight this might appear to be the case! The good news is that we have two bulbs of normal brightness. The bad news is that the energy in the chemical store of the battery is depleted twice as quickly as with one bulb. The electric circuit model confirms this point of view because the electric current in the battery (the flow of charged particles shifting energy) is doubled as the second bulb is added in parallel.

Physics and teaching models are different from a...

All teaching models and analogies have their strengths and weaknesses and it is important to be aware of what these are, and...

Investigating the current around a circuit

Class experiment: the fact that current is the same all round a series circuit may have been discovered when using ammeters...

Questions to review current thinking, to provoke thought and discussion.