Students will probably have met the simple molecular picture of solids, liquids and gases. Matter is, in every case, made up of atoms or molecules, but with different amounts of arrangement (‘order’) and different types of motion.

The story of the development of the kinetic theory is too good a story to split up and tell as individual experiments. It demonstrates the interaction between observation and experimentation. Thinking about the causes of observed behaviour involves model-building and theorizing.

Show your students models, preferably in several forms, but murmur gentle warnings that a model is not the real thing. This kind of reservation is discouraging when young people first meet it. But they can learn to enjoy devising models and thinking in terms of them with much greater freedom and skill and imagination once they realize the scope of scientific models as scientists use them.

Show your students real balls as models of gases. Imagining their paths and collisions will help in thinking about gases, to suggest a line of investigation, or to illustrate a technical term such as ‘mean free path’. You might contrast such molecular models with mock-up models, such as a tiny wooden model of a fission reactor or a huge wax model of a flower. The latter models are used to aid people in visualising; the former are used for constructive thinking.

Discussion of physical models can lead on to an algebraic model developed from the kinetic theory for the pressure of a gas. The algebraic model can be used to make predictions. The equation of the pressure of a gas can be used, for example, to estimate the molecular speed and mean free path of the molecules. It could also lead to an estimate of Avogadro’s number from some simple measurements. Teaching-models such as these cannot prove a theory right. But they help students to visualize and understand the theory.

All theoretical physics uses models as essential parts of the framework of knowledge, but with great care to remember where the words, phrases, descriptions, are only parts of models. All models have their limitations as well as strengths, and it is vital to understand both. Without imaginative thinking in terms of models, scientific knowledge would be merely a pile of facts, codified here and there in laws, little more than a handbook of data.

Even if you cannot put these ideas over to students, think about the nature of science and the part played by models in it when you use demonstration models as part of your teaching. 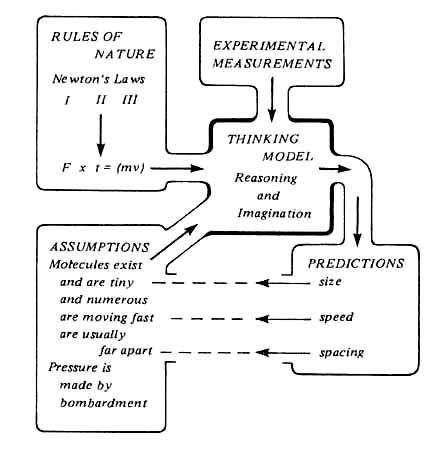 Models enable students to visualize what might be happening to particles in...

Imagine molecules in a gas; dots spaced far apart. Add arrows to show the random motion, not all speeds (arrows) the same but...

This episode looks at Brownian motion as evidence for the particulate nature of matter, and the macroscopic gas laws.