William Thomson, who would later become Lord Kelvin, was a precocious student. At the age of 16, he published his first paper, a development of ideas in a paper by Fourier. He holds the record for being both the youngest and oldest member of Glasgow University - when he was 10 years old, Kelvin participated in a programme for able primary school students at the university and was a member of faculty there until he was 75. Kelvin studied at Cambridge University, founded the Cambridge Musical Society and spent two hours a day rowing. Though he finished second in his year in his final exams, a story reports that one of his examiners remarked to another, “You and I are just about fit to mend his pens.”

After graduating, Thompson spent a year in Paris, before being appointed a full professor at the University of Glasgow at the age of 22. One of Kelvin’s most significant projects was his contribution to the laying of Atlantic telegraph cables, for which he received a knighthood. He invented the mirror galvanometer, the electrostatic syphon recorder, a device for recording telegraphic Morse code messages that pre-empted the invention of the inkjet printer, and a machine for predicting tides (now housed in London’s Science Museum).

In 1867, Peter Guthrie Tate gave a demonstration of the strange behaviour of smoke rings in his Edinburgh laboratory. He showed how, if two rings travelled along the same axis, the leading ring slowed, expanded and the pursuing ring accelerated and contracted, passing through the other. Kelvin was greatly influenced by this demonstration and developed a vortex model of the atom, going on to argue that the Sun gained energy from the action of a vortex of comets circling it.

Kelvin made use of an innovative questioning technique in his lectures. He wrote the names of his students onto cards and sorted them into a box divided into three sections: 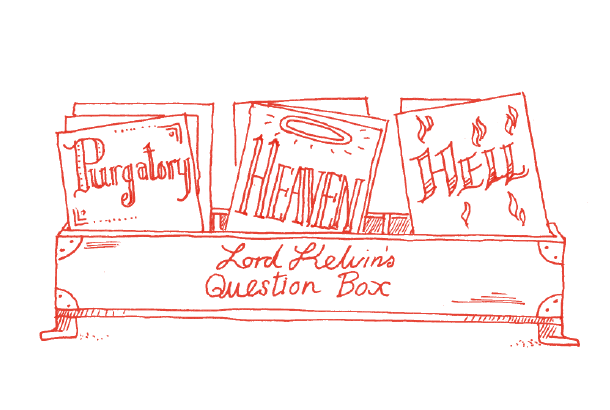 Kelvin’s question box now forms part of the collection of the Hunterian Museum.

Many teachers will empathise with another of Kelvin’s quirks. After two successive lectures in which he could not find a single suitable piece of chalk, Kelvin ordered his assistant to have a hundred pieces ready for his next lecture. His assistant dutifully set out a hundred pieces of chalk along a 5 m window ledge. At the start of his next lecture, Kelvin counted the pieces of chalk and congratulated his assistant to the applause of his audience.

Kelvin’s scientific thinking sometimes spilled over into his personal life. Over lunch one day, his wife suggested a walk and Kelvin is said to have replied: “At what time does the dissipation of energy begin?”

In his lifetime, Kelvin published 661 scientific papers and filed 75 patents. Despite his great successes, he made a number of assertions that proved to be incorrect. He is said to have remarked that, “X-rays will prove to be a hoax” and famously underestimated the age of the Earth to be only somewhere between 20 and 400 million years. Rutherford reported being troubled by the prospect of giving a speech at the Royal Institution when Lord Kelvin was part of the audience because of their disagreement over the age of the Earth. Fortunately, a conflict was avoided:

To my relief; Kelvin fell fast asleep, but as I came to the important point, I saw the old bird sit up, open an eye and cock a baleful glance at me! Then a sudden inspiration came, and I said Lord Kelvin had limited the age of the earth, provided no new source was discovered. That prophetic utterance refers to what we are now considering tonight, radium! Behold! The old boy beamed upon me.

Kelvin received 21 honorary degrees from universities around the world, was awarded the Legion of Honour, Grand Officer by France, the Order of the First Class of the Sacred Treasure of Japan and was made a Knight of the Prussian Order Pour le Mérite.

Energy generating companies need to predict the load on their network to ensure that demand can be met. A commonly plotted...

It is challenging to toast bread to the perfect colour because of thermal runaway: as the surface of the bread darkens it...

Light and sound as pathways

Light is often seen as a place where energy can be found. Here we show a better way to think about light and energy.