Jet of steam from a boiling flask

This demonstration shows that ions can act as condensation nuclei in a supersaturated vapour. This idea is used to reveal the tracks of alpha particles in both the expansion-type cloud chamber and the diffusion cloud chamber. This is useful preparation for both of these experiments.

There is a risk of scalding from steam during this demonstration. Ensure the end of the steam tube is clamped in a suitable position to minimize this risk.

You could use an EHT supply at 5,000 V rather than a Van de Graaff generator. However, the spark is not as impressive (due to the higher capacitance of the Van de Graaff). Two strips of Perspex may be needed as extra insulation at the place where the wires are clamped.

Like a boiling kettle, the white cloud that you can see consists of droplets of condensed water vapour formed when the water vapour meets the cold air.

The transparent gap between the jet nozzle and the white cloud contains the super-saturated water vapour. 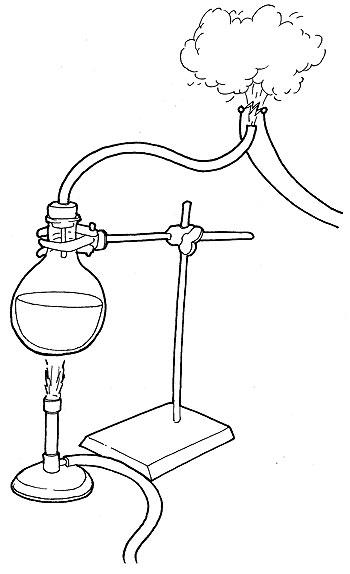 Carrying out the demonstration

The nature of the radiation

It is quite common for teachers and students to talk about alpha, beta and gamma radiation. In fact, on first discovery...

Why do beta particles travel farther in air than...

The thinking that causes difficulty here follows on directly from the previous challenge. Relationships of the form more of...

High-speed particles from the nucleus and elsewh...

Particles that ionise must also shift significant quantities of energy, and it is this that (again) suggests that they are...